It is an overgrown and decaying graveyard east of Las Hermanas.

A portion of the Luisa Fortuna mission "Captain De Santa's Downfall" takes place in this location.

The Stranger side-mission "Eva in Peril" ends in this location.

A piece of the Reyes' Rebels Outfit can be found in a chest here; it is located in the southern east corner of the graveyard. It is also one of the locations to take down a bounty to reach 100% Completion.

During Undead Nightmare, the player will be asked by the Mother Superior of Las Hermanas to cleanse the cemetery of the Undead as part of the mission "Mother Superior Blues". Vincente de Santa will re-emerge as the 'boss' of this cemetery.

The 4th treasure can be found near a group of palm trees near this location. See Undead Treasure Hunter for further guides. 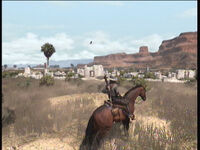