Sergio Vincenza is a former military sharpshooter who has been outlawed following an attempt to blow up the Lemoyne statehouse and kill the governor. Vincenza is stated to be on the run as he is wanted for terrorism, attempted assassination and promotion of anarchism.

The player has the option to track him down to the Fire Lookout Tower in Roanoke Ridge, where he may be killed or captured for a reward. 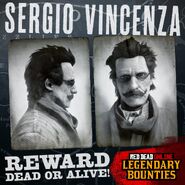