With the addition of the Legends and Killers DLC pack, Shadow Wolf is a multiplayer character model in Red Dead Redemption.

Shadow Wolf was a native American that preferred hunting and scouting on his own, but when Chief Running Moon told Shadow Wolf he couldn't visit with his favorite cousin; Red Harlow, anymore, he drifted even farther away. Despite this, the tribe always respected him for his amazing woodcraft and the fact that he never backed down from an insult, especially one from the Black Elk Tribe.

When it was discovered that Red was still alive, but locked up in General Diego's mine, none questioned the decision of the elders to send Shadow Wolf to the rescue. His final deeds drove the Black Elk away and ended the desecration of Bear Mountain.

Shadow Wolf ended up becoming more famous dead than he ever was alive.

Shadow Wolf becomes available as a playable character in Showdown Mode after completing the mission "Bear Mountain" with a Good rating. His unique ability allows him to become invisible for a short time.

Shadow Wolf is listed in Sheriff Bartlett's Journal on pages 18 - 21 under the Heroes section. The pages are unlocked by unlocking his Showdown Mode character via the method mentioned above.

With the Legends and Killers Pack, one can play as Shadow Wolf in Red Dead Redemption multiplayer. While playing as Shadow Wolf, the player can throw tomahawks with greater accuracy than with any other playable character.

The death of Shadow Wolf.

Shadow Wolf as a Multiplayer skin. 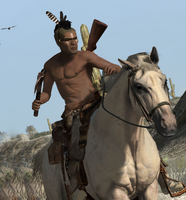 Shadow Wolf riding a Hungarian Half-bred in Redemption multiplayer.
Add a photo to this gallery

Retrieved from "https://reddead.fandom.com/wiki/Shadow_Wolf?oldid=328765"
Community content is available under CC-BY-SA unless otherwise noted.