Shaky is a contraband smuggler working out of the warehouse in Thieves' Landing. Shaky has a very pronounced stutter, which is the origin of his nickname. Shaky is associated with Irish, who supplies him with morphine to calm his nerves.

The protagonist can encounter Shaky sitting on a dock bench at Thieves' Landing. Having just injected a syringe of morphine, he explains that he is not a bad person and asks if they are just there to stare or stab him in the back. Before the protagonist can leave, he offers to pay them if they kill Ian Carmichael, his former best friend who he claims stole his girl.

Afterwards, Shaky can offer jailbreaks, thefts, paid killings, and supplies destruction missions to the player. His missions give negative honor.

Shaky is featured in the mission "On Shaky's Ground". Due to his associates suspecting him of working with someone else, Shaky is tied up and beaten. However, Irish promises John Marston that Shaky will have the ammunition needed for the Gatling Gun, thus prompting a rescue attempt.

Marston breaks into the warehouse and eliminates the men holding Shaky, before untying him. The two then fight their way out into the storage area and eventually find the ammunition. Irish arrives and helps Shaky load the ammunition onto the wagon, after which Marston and Irish part ways with Shaky.

He is known to be mocked by Irish. Shaky will sometimes attempt to respond to Irish with a witty retort, but his stutter weakens the effectiveness of the insult. Shaky appears to be more courageous than Irish, fighting alongside John Marston. True to his word, he immediately gave John the ammunition for the Gatling Gun. 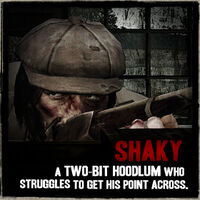 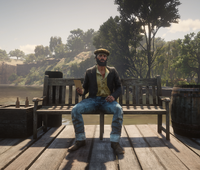 Shaky sitting at the docks in Thieves' Landing