Shane Finley is a minor character in Red Dead Redemption 2.

Shane Finley is a criminal wanted for theft, cattle rustling and child murder. He had a bounty of $400 and was wanted in five states. A newspaper article states that Finley has evaded capture multiple times and is adept at wearing disguises.[1]

Sadie Adler went after his bounty and found him disguised as a lady in a house for fallen women.

As Sadie was bringing Finley in for the reward money, rival bounty hunter, James Langton stole Shane Finley from her near Armadillo. Sadie and John go to Pike's Basin to recapture him from James Langton and his men. After dealing with his men, John and Sadie take him to Blackwater to collect his bounty. 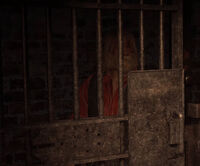