Sharpshooter Challenges in Redemption 2 are gameplay challenges which involve weapon accuracy, mainly with firearms, in the single-player of Red Dead Redemption 2.

These challenges must be done in order, progress made before they are activated does not count.

Kill five flying birds while on a moving train.

If you stand on the platform at the front of the train, the locomotive driver will get angry and tell you to get off, and the guards inside the train will be alerted, but none of them will be able to get to you, and you can shoot all the birds you want without getting a bounty.
You can get on this platform just before the train leaves a station and jump while it is moving, so the guards will not chase you.

Kill an enemy at least 80 feet away with a thrown tomahawk.

This can be easily accomplished without losing honor by finding a rival gang camp in the wild, specialy in a vast open area like the Heartlands (O'Driscolls can only be found here before the epilogue, however). NPC camps being sacked by Murfrees are also an good option, as most of them can be found in open areas too.

Alternatively, the player can try their luck in gang hideouts, the best being Hanging Dog Ranch, the front gate of Shady Belle, and (after the epilogue) Fort Mercer, Thieves' Landing and Gaptooth Ridge.

Kill six animals without switching or reloading your weapon.

A very quick way to accomplish this is by finding a flock of ducks or geese resting by a river and then shooting them with Dead Eye activated with the varmint rifle.

Using a rolling block rifle or carcano rifle, fully upgraded, with high velocity ammo or explosive ammo is recommended but it can be achieved with less upgrades. Hanging Dog Ranch is a good place as there is a long-range, flat area and you won't lose honor or attract any unwanted attention. For this location you need to stand approximately just above the first e in creek on the south of the river and adjust as necessary, the log for the challenge will give you a distance when you get a kill.

The rifle used must have a long scope attached, or else the distance will not be counted.

Get seven headshots in a row.

Again, the best way to accomplish this without losing honor is by overrunning a rival gang hideout, like Hanging Dog Ranch, Shady Belle or Fort Mercer.

Disarm three enemies without reloading or switching your weapon.

The easiest way of completing this challenge early is to go to a place where enemies respawn in the same position and where you can shoot at their weapon easily with a scoped gun. Go behind one of them, aim at the weapon (the gun sight point should be white, not red), shoot it, escape by foot, and repeat two more times to complete the challenge.
A good place to do this is the Hanging Dog Ranch: sneak behind the most southeastern guard and aim at the butt of his rifle with a scoped carbine.

Another convenient way is waiting until Chapter IV's "Urban Pleasures" is completed and the third level of Dead Eye is achieved which allows continuous manual fire- since guns will be fully reloaded every time Dead Eye is activated, players must successfully disarm three enemies in a single use of Dead Eye. Firearms with high ammo capacity are recommended.

A reliable strategy is to seek out a gang hideout where the player has a clear view of the enemies yet has cover far from the danger, such as Shady Belle or Fort Mercer. Pick up a scoped repeater (Lancaster or Litchfield are recommended), take cover far enough that the enemies won't chase you and use the scope to shoot their right arms.

Another way to complete this challenge is with the use of a Bow which does not reload according to the game's mechanics.[1]

Shoot three people's hats off in the same Dead Eye use.

The third level of Dead Eye is required to complete this challenge, completed in Chapter IV's "Urban Pleasures". The people whose hats are shot off must not be killed or it will not count.

The south side of Valentine station usually has a few people stood around or walking by. Despite it being a populated area you can escape quickly to the south.

Also, top hats like the ones used by the rich folk in Saint Denis, are a very easy target to avoid murder, and the wanted level is relatively easy to lose if the player knows their way throughout the city's alleys.

In the Epilogue, the sombreros from the Del Lobos and the grenadier hats from the Skinner Brothers are also easy to shoot off, especially from a safe distance.

You can go in and out of scope. South of Heartland Oil Fields by the 'W' on the map is a very good spot for having a lot of birds flying around. Otherwise, a spot by a river or lake with resting birds can work well. 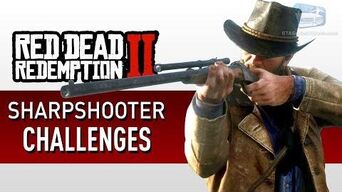