Town of Annesburg in Roanoke Ridge, State of New Hanover

At some point prior to 1898, Jones was elected the Sheriff of Annesburg. He has served the town well, and is well-respected by its inhabitants.

Jones can be found at the Sheriff's Office in Annesburg.

If the player becomes a bounty hunter, they can capture various wanted individuals that appear on the bounty board outside Jones' office, and bring them in dead or alive. Jones will pay them every time, and make a comment depending on whether the criminal is alive or dead.

The Sheriff at his desk in Red Dead Online 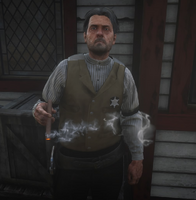