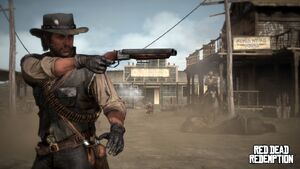 Shotguns use a different style of ammo when compared to other weapons in-game, firing a spread of pellets instead of a single projectile. This increases the chance of hitting an enemy on the run or hitting multiple enemies, but limits the effective weapon range of most shotguns to close quarters combat. The exception in Red Dead Redemption occurs in the Undead Overrun game mode where players can obtain shotgun slugs (single projectiles) at times, and slugs are available for purchase in Red Dead Redemption 2.

Some shotguns use some type of manual action to eject and chamber shells, such as the pump action, but are slightly slower to fire. There are break-action shotguns that can fire somewhat faster than a pump action since the shells are already in the breech, but usually hold fewer shells because the number of shells is reliant on the number of barrels, which is usually two at most. However, some shotguns use recoil or gas to automatically eject and chamber shells, firing every time the trigger is pulled. Most shotguns are loaded one shell at a time, either into the breach or shell loading port. Shotguns use Shotgun Ammo.

Using Dead-Eye Targeting can eliminate several enemies at close range in a short amount of time, but it's main use is to mark enemies at further range, as Dead-Eye seems to increase the range of shotguns, but not enough to make them compare to repeaters or rifles.