Sid Winkler is a minor character and a bounty target featured in Red Dead Redemption.

Sid is a Criminal wanted for grand larceny and can be captured or killed depending on the player's choice. According to his dialogue, his mother may have been a prostitute.

Sid can most often be found around Thieves' Landing, frequently loitering inside the saloon and around the brothel. He can sometimes be found at Rathskeller Fork, around the saloon. He can also be encountered at the Tumbleweed gang hideout, though he will be hostile. Sid can also be seen doing odd jobs in Thieves' Landing. Sid can also be seen during numerous random encounters, in which he will rob a store or attack a stagecoach with other Criminals. Marston has the choice of capturing him, killing him, or letting him get away. Winkler also makes a brief appearance during the mission "On Shaky's Ground", in which he can be seen with a prostitute in the brothel. He can also be seen in Tall Trees having a camp together with another Criminal. Sid and his companion will either ignore Marston or shoot on sight. Sid can also be seen in Nightwatch job in Blackwater, he is usually a horse thief or a burglar.

During the "fate of the stagecoach" random encounter in New Austin, either Winkler or Kent Gallaway may thank the player if the latter chooses to side with the bandits. 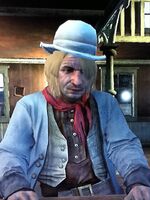 Sid sitting in the saloon in Thieves' Landing.

Sid, seen during the "Life in the West" trailer. 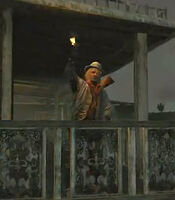 Sid about to throw a fire bottle. 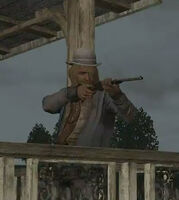 Add a photo to this gallery
Retrieved from "https://reddead.fandom.com/wiki/Sid_Winkler?oldid=391592"
Community content is available under CC-BY-SA unless otherwise noted.