Simon Pearson was born to a family of whale hunters, and he initially wanted to follow in their footsteps. However the whaling industry had declined by the time he left school, forcing him to pursue other careers [1] Pearson once served as a sailor in the United States Navy, though it is unknown how long for. Notably, he mentions being stranded at sea for fifty days on a ship struck with plague, and is generally nostalgic for his time at sea. At some point prior to 1899, he got into financial trouble, and subsequently became the butcher and cook for Dutch van der Linde and his gang after they rescued him from loan sharks. At camp, the player can donate provisions to Pearson, or use his services to craft better gear or extra features to the camp.

Pearson tells Arthur that they are almost out of food. Arthur is initially unsympathetic, until Charles steps in offers to take Arthur out to hunt some deer. The pair bring back two deer, which Arthur and Pearson skin.

Shortly after setting up camp at Horseshoe Overlook, Pearson remarks that the food supplies are still low and encourages his fellow gang members to go hunting and start contributing again.

Pearson can be encountered having an argument with Sadie, over her not wanting to cut vegetables. After Arthur talks to him, he sends Arthur and Sadie to Rhodes to buy groceries and post a letter for him.

Later on, Pearson tells Dutch and Arthur that he came across some O'Driscolls, who said they wanted a parley meeting with the Van der Linde gang. Dutch, Arthur and Hosea are all very skeptical, but Micah insists that they should try. He eventually convinces Dutch to go along with it, on the condition that Arthur watches over them with a sniper rifle. Pearson is told to stay behind while Dutch, Arthur and Micah go, and he later apologizes to Arthur when he returns to camp afterwards - badly injured due to the supposed parley being a trap.

Pearson becomes noticeably depressed and demoralised after the gang is forced to relocate to Shady Belle. He occasionally expresses his worries to other members such as Susan Grimshaw, who berates him for his perceived self-pity.

At some point during this chapter, Pearson may invite Arthur to go searching for crayfish along the swampland shore. As well as crayfish, the two also manage to find Gator eggs, by stealing them from nearby nests.

With the gang on the brink of collapse, Pearson becomes increasingly unhappy with the situation, and decides to leave before things get worse.

Eventually, Pearson settles into a happy life, running the general store in Rhodes. He gets married, and still keeps a photograph of his former family close to his counter.

Pearson is described as a loud and jolly degenerate, who appears to be in denial about the turn his life has taken. He takes his position as the camp’s cook seriously, and is always grateful when Arthur offers to go out hunting. Pearson is quite fond of his time spent in the Navy, and spends most of his time nostalgically reminiscing about his experiences at sea. He is one of the most peaceful members of the gang, as he doesn't actively participate in any criminal activities and settles down to an honest life after the gang's downfall.

Pearson is a portly, balding, middle-aged man with collar-length brown hair and a bushy mustache. His upper body garments change with location: in colder climates, he tends to wear a thick, pale purple coat with black gloves and an orange scarf, while in warmer temperatures, he's seen sporting a black, red-banded top hat, a striped tan shirt and a small white apron. During chapter 2, Pearson can often be seen wearing a faded black sweater or a blue jacket and vest over ripped white shirt. He's always shown wearing standard navy uniform pants with black leather jackboots, as well as an anchor tattoo on the back of his hand from his time in the US Navy.

By 1907, Pearson's hair has grayed and the thinning hair on top of his head is nearly gone. He often wears a blue and white striped shirt with a large, full body apron, along with the same navy trousers.

Throughout Chapters 2-4 and Chapter 6, Pearson is capable of crafting satchels for Arthur and decorations around the camp. The range of items he can craft is greatly expanded once the player purchases Leather-working Tools from the Ledger for $225 from the Tithing Box.

Pearson in the introduction 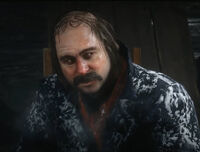 Pearson, Arthur and Charles in Colter

Pearson sitting on his chair in Colter

Pearson suggesting a parley with the O'Driscoll Boys

Pearson and Dutch carrying Arthur to his bed

Pearson and Hosea at Clemens Point

Pearson singing at the campfire 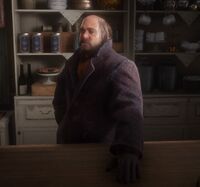 Pearson wearing his winter coat in 1907