Sisika Penitentiary is a maximum-security prison facility in Red Dead Redemption 2 and Red Dead Online in the Lannahechee River.

Established in 1844, this prison lies on a small island off Lemoyne's eastern shore.

The island is surrounded by watchtowers, each housing guards on the lookout. Encircling the prison are many fields and barns, all of which serve as labor camps for the inmates. In the center sits the main prison itself, comprised of many small buildings, and larger ones. These structures are enclosed by a fortified wall. The penitentiary is segregated into two wards; one for males, and the other for females.

In 1898, after the murder of Philip LeClerk in Blackwater, the online protagonist is framed and wrongfully convicted of committing the crime. They are sent to Sisika Penitentiary and are sentenced to six months of penal labor and eventual execution. Around one week before their planned execution, the protagonist is freed by Horley, when he and two hired gunmen intercept the transport holding the protagonist.

During the Van der Linde gang's failed 1899 heist of the Saint Denis bank, John Marston is captured by Pinkertons and imprisoned at Sisika. After his return from Guarma, Arthur begins planning a way to break him out with the help of Sadie.

Arthur flies above the prison in a hot air balloon, along with Arturo Bullard, in the hopes of locating John. Using binoculars, Arthur manages to spot John, before the prison guards open fire on the balloon and thus cause him to retreat to the mainland.

Later, Sadie and Arthur take a rowboat to the island and land on the island's western shore. They quickly kill the guard in one of the island's watchtowers, and spot who they presume to be John. After defeating the guards patrolling the prisoners working in the fields, they realize that the man they believed to be John is, in fact, not John. Swiftly, Arthur captures another guard and holds him hostage forcing him to reveal that John is not working that day. The two, with the guard hostage, approach the entrance of the prison and demand an exchange. After getting John in the trade-off, they fight their way to the shore, enter the boat, and row back to the mainland. 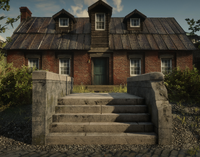 One of the watchtowers

Sisika Penitentiary seen from the south