The Skinner Brothers are an antagonistic faction featured in Red Dead Redemption 2 and Red Dead Online.

The Skinner Brothers are a gang of ruthless killers and thieves who move from place to place to hunt and kill animals and people alike. The Skinners are notorious for their cruel and sadistic acts and horrific tortures. They're known to, among many things, scalp, dismember, disembowel, roast and flay people alive, being less like an outlaw gang and more like a cult of deranged serial killers.

Unlike other gangs, they have very little interest in money, appearing to survive off scavenging and hunting. They seem to be nomadic, and completely cut off from civilization, as such, the gang has no formal dress code, though many of them do possess large, unkempt beards and scruffy clothing, as a result of their lifestyle.

Also, unlike most gangs, they have no base of operations, on account of their nomadic lifestyles, instead living in primitive camps, either their own, or ones seized from their victims.

According to Charles Smith, the Skinner Brothers arrived in the Tall Trees, West Elizabeth around two years before 1907 and have been terrorizing people in the area ever since.[1]

They impede John Marston in his attempts at building a ranch at Beecher's Hope, ambushing him, Charles and their hired guns outside of Manzanita Post. After fighting them off, John and Charles find the body of Willard Wayne, one of their bodyguards, with a dagger lodged into an eye socket. After Charles buries him, he, John and Uncle begin constructing the ranch. Later, when the trio finished building the house, they celebrate and get drunk. While hungover, the Skinners capture Uncle and roast his back over an open fire. John and Charles manage to rescue him, killing many Skinners in the process. Charles says afterward that the Skinners are unlikely to disturb them after this, presumably due to the losses they sustained from this skirmish.

As well as this, the player can hunt down Otis Skinner and Elias Green as bounties. Both are wanted dead or alive and, as such, they can either be killed or captured by John Marston. If the latter option is chosen, they will be publicly hanged in Blackwater.

What happened to the Skinner Brothers afterward is not known, though they've likely moved far from West Elizabeth by 1911, or they may have simply disbanded before then.

The horrors one can discover at a Skinner Brothers camp 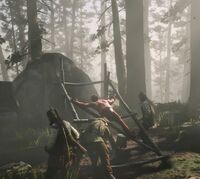 Retrieved from "https://reddead.fandom.com/wiki/Skinner_Brothers?oldid=415723"
Community content is available under CC-BY-SA unless otherwise noted.