The Skunk is an animal found in Red Dead Redemption.

Skunks are small, black-furred creatures with a distinctive white stripe down their back and tail. In-game, they are similar in size and shape to racoons, and possess nearly-identical animations and AI behavior.

Skunks appear to be crepuscular - while they do occasionally appear in the daytime and full dark, they are seen at dusk and dawn with much greater frequency. In the Diez Coronas region, for instance, 7:00 - 9:00 P.M. appears to be prime skunk time. Their frequency may also be dependent on the time of day; it's been noted that they are most active after 6:00 A.M. The player must kill and skin five to complete Rank 6 of the Master Hunter Challenge.

In New Austin, there are several locations where the player can find skunks:

In Nuevo Paraiso, skunks can be found in these locations:

A few locations in West Elizabeth also have skunks: 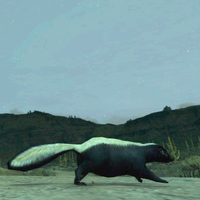 The player must kill a skunk to contribute to the successful completion of the following trophy/achievement:

Retrieved from "https://reddead.fandom.com/wiki/Skunk?oldid=377412"
Community content is available under CC-BY-SA unless otherwise noted.