Slick Nick Funtz is the first American Army character available in the Outfitter. His character model is available at Multiplayer Level 1.

He wears the basic U.S. Army uniform of the 1911 period, with the light khaki shirt and the darker pants and canvas leggings. Nick lacks any major form of equipment, but he wears the distinctive hat worn by U.S. Army. The sleeves on his shirt are rolled up, and the lack of any rank insignia on his sleeves indicates that he is the lowest rank of Private, the Private (E-1). Privates do not earn insignia until they reach the rank of Private (E-2), which conveys the insignia of a single chevron. His uniform also has blood stains on it. He appears to be the youngest member of the American Army characters available. 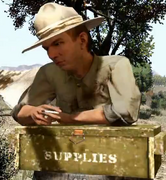 Slick Nick Funtz in the Outfitter.
Add a photo to this gallery
Retrieved from "https://reddead.fandom.com/wiki/Slick_Nick_Funtz?oldid=383124"
Community content is available under CC-BY-SA unless otherwise noted.