Slim Grant was a gunslinger in the Old West who had an infamous rivalry with Jim "Boy" Calloway, due to Grant killing his cousin named Ged in 1882 or thereabouts. Slim Grant says that he would have similarly shot Calloway, if he had showed up for a duel they agreed to shortly after it happened.

Sometime before 1899, he became the territorial Marshal of New Hanover, based in Annesburg.

In order to prove his worth as a gunslinger, Jim "Boy" Calloway asks the player to capture and deliver Slim Grant to him. The player ventures to Annesburg, where the deputy says that Grant's last known location was near Beaver Hollow. Upon riding there, the protagonist finds Slim Grant being held captive by a handful of outlaws affiliated with the Murfree Brood gang, and following a brief gunfight, the player takes Slim Grant to Brandywine Drop in order to meet with Calloway.

Almost immediately, an argument erupts between Calloway and Slim Grant about the latter killing Ged Calloway, during which Grant tells Calloway to move on and refuses to fight him in a duel, telling him that they are older and lucky. As Slim Grant leaves, Calloway immediately shoots him in the back, killing him in seconds. Calloway himself is subsequently slain in a duel with the player in attempt to regain his honour, avenging Slim Grant.

In his book about Jim "Boy" Calloway, Theodore Levin fabricates these events by writing that Slim Grant shot Calloway in the back after being mortally wounded by him in a duel.

The Cigarette Card of Slim Grant 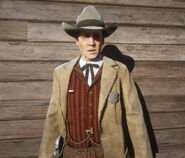