Songbirds are a type of bird found in Red Dead Redemption.

They can be either red, yellow, green, or blue in color, and are very small. Songbirds are found abundantly throughout the frontier, and can easily be identified by their brightly colored feathers that contrast with the scenery.

Simply walking or riding through the landscape will reveal songbirds flying by. They can also be seen perched in towns or in trees. Open fire into random bushes and trees, and different kinds of songbirds may fly out. Songbirds also vary from other birds by the way they quickly flap their wings whilst in flight, and their fast speed while flying. They resemble the real world indigo bunting and common yellowthroat.

Rarely, a red colored songbird may be seen, particularly in Mexico.

Songbirds can be shot and plucked. They drop feathers that may be sold to merchants for a slightly higher price than crows, vultures, and most other birds.

Like most dead targets, a dead songbird becomes an x on the mini-map when Marston kills it, and is close enough to it. 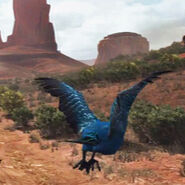 Killing a Songbird is required for the following Trophies/Achievements: