Spare the Rod, Spoil the Bandit/dialogues

Spare the Rod, Spoil the Bandit is the eleventh mission in Red Dead Redemption.

Leigh Johnson asks John Marston to help in silencing a group of outlaws who have been terrorizing a town. They form a posse of Marston, Marshal Johnson, Eli, Jonah and Dell Hopkins and ride out towards Ridgewood Farm.

The player will start off outside the Sheriff's office. After getting details of the player's mission, the player must mount their horse and ride with the Marshal and his men. As the posse nears the farm, they notice vultures flying high above. After investigating two campsites filled with bodies (make sure not to hang around the campsites too long or the player will fall behind), the posse rounds up at Ridgewood Farm. The group searches the area for any signs of life, and afterwards Marshal Johnson calls the posse to the barn, hoping to find either survivors or bandits inside.

After the Marshal, deputies and Marston find a horrific display of blood, slaughtered animals and even a stripped body hanging from the rafters, a young girl runs out of the barn, explaining that the bandits are holed up inside the Ridgewood Farmhouse in the middle of the ranch. As the posse then heads towards the house to investigate, bandits pour out and a gunfight ensues.

The group then dispatches all of the bandits and heads inside, watching carefully around the doorways and walls as Marston makes his way upstairs to save the few remaining survivors. The player is able to save a couple before they face up against a bandit using a woman as a human shield. This shot must be just right and executed quickly, or else the bandit will shoot her in the head and the player will be forced to restart the mission.

After the violence, the survivors are rounded up and questioned for answers about more bandits. The hostages notify the Marshal of the location of a group of bandits, and the posse sets out in pursuit. Deputy Eli mentions that this looks to be the work of Williamson's gang.

After catching up with the bandits, a cutscene takes place showing Bill Williamson and John Marston talking once again. This time, however, Williamson runs away, sending his gang and right hand man Norman Deek to finish the job. The posse takes cover in a broken-down shack called Mercer Station while fending off the bandits. After two waves of bandits, the mission will end with a cutscene showing Norman Deek getting caught.

I don't want to kill you Bill, but I will.

This son of a bitch is still breathing!

Norman Deek
Add a photo to this gallery 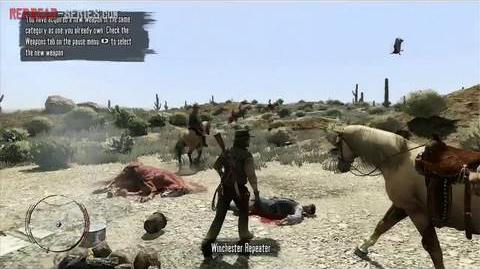 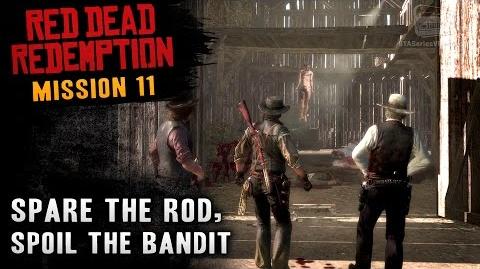 Retrieved from "https://reddead.fandom.com/wiki/Spare_the_Rod,_Spoil_the_Bandit?oldid=395099"
Community content is available under CC-BY-SA unless otherwise noted.