Sperm Whale Bones of a disparate skeleton are a point of interest in Red Dead Redemption 2.

It is unknown how the bones of a Sperm Whale appeared in the area. The last time the central United States was covered in water was in the Cretaceous period, when an inland sea named the Western Interior Seaway took up much of what is now North America. The changing conditions following the end of the Cretaceous period spelled the end for the denizens of the Seaway as the iconic mountains of the American West sprung up and the water receded.

It should be noted however that Cetaceans, including toothed whales such as the Sperm Whale, had not yet evolved in the Cretaceous, and therefore could not have ended up here due to the receding waters from the Western Interior Seaway, thus leaving the story of how this whale ended up in New Austin a mystery.

Arthur's drawing: "Was this a whale in the desert?" 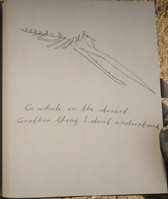 John's drawing: "A whale in the desert. Another thing I don't understand."