An enigmatic and otherworldly character, the Strange Man appears to know John Marston very well, including details about his past life in the Van der Linde gang that not even John himself remembers.

There is an abandoned shack in Bayall Edge, Lemoyne that seems to belong to the Strange Man. The shack is riddled with cryptic writing alluding to Armadillo, Herbert Moon, and the cholera outbreak of New Austin. If the player visits it as Arthur Morgan, there will be an unfinished painting of the Strange Man. If the player visits the shack as John Marston, the painting will gradually become more and more complete over the next few days, and John will document his thoughts of it in his journal, saying how it makes him feel "fascinating, awful, and seductive, all at once". Once the painting is complete, John can see the Strange Man stalking him in the mirror, but once John turns around he's gone.

A stranger in New Austin, around Hennigan's Stead, alludes to the Strange Man. He states how a man wearing a "black suit and big top hat," whom he believes to be the Grim Reaper, haunts and curses the town of Armadillo, being the reason for the Cholera epidemic. Additionally, Herbert Moon has a portrait of the Strange Man in his general store, similar to the one in Bayall Edge, though much smaller. John will notice and asks about it, claiming he recognizes the man, but Herbert Moon shrugs it off, saying that somebody gave it to him and that he has it in his store because he likes it.

The Strange Man is the focus of the stranger side-mission "I Know You", which is only available for John Marston. John meets the Strange Man in three separate places during the mission, once in each territory of the game.

Each time, the man gives vague answers to John's questions, and twice, asks John to perform errands for strangers. The first is to visit a man about to cheat on his wife, the second is to visit a nun trying to raise money for charity. The player can either make the morally good choices things of stopping the man and donating to the nun respectively, or the morally wrong choices encouraging the man to cheat on his wife and robbing the nun.

The Strange Man appears one final time overlooking Beecher's Hope. He is unforthcoming about who he is, and his standoffish demeanor enrages John enough to open fire on him. The Strange Man is completely unaffected and continues to stroll off into the distance.

In his few interactions with John, the Strange Man comes across as purposely enigmatic and ambiguous, but also darkly sarcastic. He speaks in cryptic phrases, and answers John's questions with evasive, occasionally even mocking answers.

Although he constantly presses John on his morality, the Strange Man's own antics seem to be entirely neutral, telling John to solve a situation but not exactly how, or his implications of employing karmic responses to his unknown affiliations with Herbert Moon and Armadillo.

The Strange Man dresses in a black three-piece suit with a black tie and top hat. He has a well-maintained mustache and deathly pale skin with dreamy, pensive eyes.

The Strange Man with John in Red Dead Redemption

A picture of the Strange man in Red Dead Redemption 2

Painting of the Strange Man in Red Dead Redemption 2 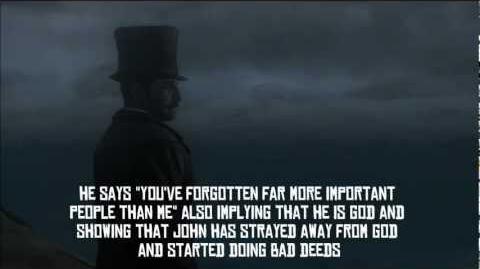 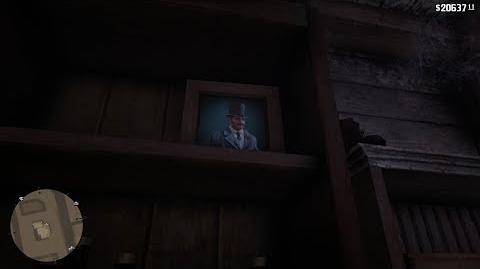 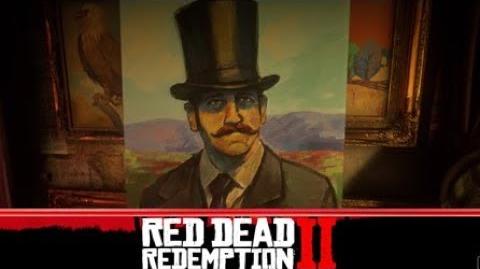 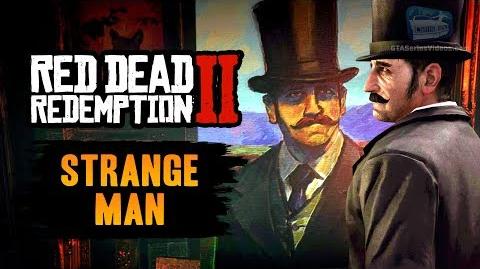