Strawberry is a settlement in Red Dead Redemption 2 in the Big Valley region of the West Elizabeth territory.

It serves as the capital of the Big Valley region. It is found roughly south-central in the region, southeast of Mount Shann. Although the city was founded as a small logging town, it has grown in recent years and displays sluices and other equipment often associated with small gold mining operations. Nonetheless, its mayor wishes to transform it into a resort town.

During the mission "Blessed are the Meek?", Arthur is tasked by Dutch van der Linde to break Micah Bell out of Strawberry's jail.

Arthur finds a winch nearby and attaches its hook to the bars on Micah's cell. After pulling the window from its frame, Arthur helps Micah out through the hole in the wall and the two begin a massacre in the town.

Lawmen and deputies are killed left and right as the two make their way to the exit. Once most of the region's officers are dead, Arthur and Micah quickly mount their horses and make their escape.

In order to find Micah's location, John drags Cleet to the gallows behind Strawberry's jail. Sadie grabs him and holds him still while John ties the noose around Cleet's neck. By grabbing the lever that would execute Cleet, John threatens him to give them the information they want.

Once Cleet has informed them that Micah is on Mount Hagen, the player can then kill or spare Cleet. However, if they decide to spare him, Sadie shoots him in the head with her revolver anyway, killing him instantly. 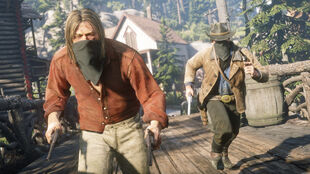 Arthur Morgan and Micah Bell running from the law following Bell's escape from jail in Strawberry. 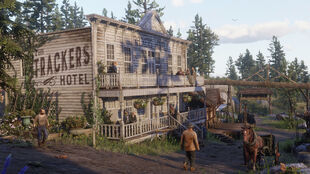 The Trackers Hotel in Strawberry.

Retrieved from "https://reddead.fandom.com/wiki/Strawberry?oldid=380979"
Community content is available under CC-BY-SA unless otherwise noted.