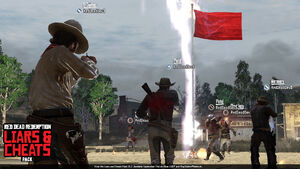 Stronghold is a multiplayer mode released in the Red Dead Redemption Liars and Cheats DLC pack.

Similar to 'Capture the Flag', it is an ongoing battle on a relatively large scale where one team will defend a set location, and the opposite team will try to destroy, or conquer said location. In some locations, the position to be conquered is a safe that when opened contains an Explosive Rifle.

Four map locations are provided with the Liars and Cheats pack. The Stronghold playlist cycles through each location.

The attacking team has a limited number of total lives (respawns) and a limited amount of time to conquer the objectives. The defending team has unlimited lives, but has a timeout period of five seconds from death until a player respawns. As with all team game modes, the player's team is blue and the opposing team is red.

The winner of the match is determined by the number of objectives achieved and the time taken to achieve the objectives. One side can win a match even without capturing all of the objectives as long as they capture more than the opposing team or capture them faster. If neither side captures any objectives the match is declared a draw - unlike other multiplayer game modes, there is no sudden death tie breaker due to the separate attack/defense sections.

The loadout available to players on each team, Defenders or Attackers, varies with each map. The following table shows the loadout for each location and side. Unlike many other game modes, additional weapons are not available in chests for supplementing the basic loadout, nor are there any ammo chests or dead-eye refills. Note that kills and headshots in Stronghold count towards the Weapons category of Multiplayer Challenges.

x = cannot be found in this location

Holding out on the Stronghold

Silence before the Storm
Add a photo to this gallery

The player can acquire the following Trophies/Achievements while playing Stronghold mode:

Retrieved from "https://reddead.fandom.com/wiki/Stronghold?oldid=388223"
Community content is available under CC-BY-SA unless otherwise noted.