The Suffolk Punch is a horse breed in Red Dead Redemption 2.

Both coat types (Red Chestnut and Sorrel) have a base value of $120 and can only be acquired by being stolen. Suffolk Punch horses pull wagons and coaches, so they tend to have higher stamina and health, but lower speed and acceleration compared to riding horses. Its handling gives it low reactivity and agility.

Suffolk Punch horses are classed as draft horses, identified by their compact, stocky frame and also by their characteristic Sorrel or Chestnut coat. Their strong build and high endurance levels make them ideal for heavy labor in farms, though their weight can make them hard to maneuver. This breed of horse is known for its good Health, Stamina and Speed, allowing it to work long hours without tiring.

Suffolk Punch horses possess a willingness to work and have a great deal of determination to press on and complete tasks that need to be completed. Surrounded by strong muscle, the breed is known to be intelligent with a neck that is powerful and arching. With short, stocky legs that sometimes appear too short for their large body, the Suffolk Punch has hooves that are sound and well formed.

The horse of Uncle throughout 1907. Nell IV has a "Few Spot Buckskin" coat and can be found at Beecher's Hope. In the mission "Home Improvement for Beginners", Nell IV is used alongside Charles Smith's horse, Falmouth, to pull down the shack which previously stood on the land at Beecher's Hope.

Nell IV in the corral at Beecher's Hope 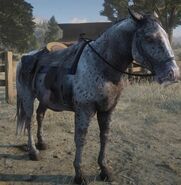 Retrieved from "https://reddead.fandom.com/wiki/Suffolk_Punch?oldid=414106"
Community content is available under CC-BY-SA unless otherwise noted.