What is there to prevent someone from going to Mexico or West Elizabeth before these areas are unlocked?

Im trying to make a virtual map for red dead redemption, the only problem im finding is when im using the map, what is a pathway and what is a road...i know ones thicker then the other but its still hard to tell...if someone could possibly help me igure out what is a road and a pathway it will make my job a hell of a lot easier or you could just say when im done what should be changed

How the Hell is R* Calculating 94 Locations?

So I've been going round-and-round trying to get the location numbers to match the total 94 needed for 100% Completion.

So I finally broke down and started numbering the locations on the map that R* provides at the Social Club. This map has 85 unique location markers on it - observe: 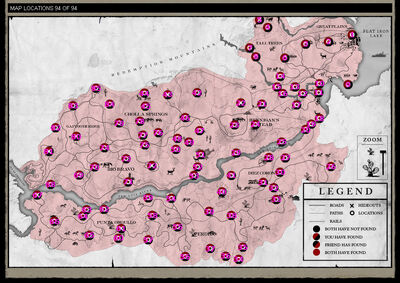 If this is the case, then 9 locations count twice. But I can only think of 7 locations that will fit this bill, which are, of course, the locations that straddle two territories: Butter Bridge, Dixon Crossing, Frontera Bridge, Manteca Falls, Mason's Bridge, Montana Ford and Tanner's Span.

But adding an additional 7 to the total number of markers on the map (85), only comes up to 92: 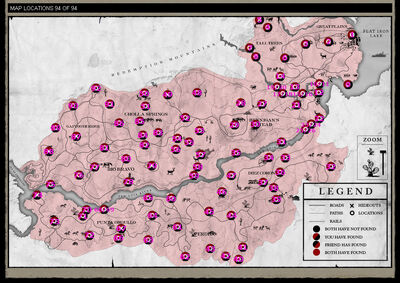 Even if I decide to add to that list Ramita de la Baya, that will still only bring the total to 93.

Does anyone know if there is another location or two that count as 2 locations when found?

I think you might've misunderstood my question... ;)

By using the location map they provide on the Social Club site the best I can come up with is 93 locations, and that's after some fudging on my part.

There is at least one location that is counted twice that is not obvious like a bridge or Manteca Falls or something.

Lately I've been trying to achieve 100percent in red dead redemption, I bought every map but here are 2 locations from mexico that are missing, what are they I have been roaming mexico for ages and now i'm about to give up.Hunter Steven 21:47, December 5, 2010 (UTC)

Retrieved from "https://reddead.fandom.com/wiki/Talk:Locations_in_Redemption?oldid=283934"
Community content is available under CC-BY-SA unless otherwise noted.