Tempest Rim is a natural formation in Red Dead Redemption 2 and Red Dead Online, in the Grizzlies West region of the Ambarino territory. It’s also referred to as the "unreachable plateau", due to the player not being able to access it. 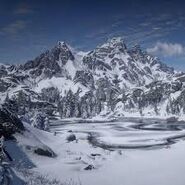 The snowy parts of Tempest Rim