Tesoro Azul (Spanish for Blue Treasure) is a Ghost Town and a prominent gang hideout in Red Dead Redemption in the Punta Orgullo region of the Nuevo Paraíso territory.

It functions as an outlaw hideout occupied by mexican Criminals, but only following the completion of the Vincente de Santa mission "The Demon Drink", which ends in this location.

The final segment of the Stranger side-mission "Funny Man" takes place in this location.

According to a campfire story in Mexico, it gets its name because it used to be a mining town for turquoise.

It is featured in the Outlaws to the End Co-op mission "Ammunition".

During the Undead Nightmare, this is one of 23 locations that must be cleared of the undead and then protected from re-infestation thereafter. Like all other rescued settlements Tesoro Azul features a safehouse, it is the house to the right of the church, the same house that the deputy is held in during the single player gang hideout.

A total of three survivors are found here, including Julian Coronado and Selestino Herrada, as well as Victor Ortega who, somewhat ironically considering the criminal pasts of his fellow survivors, is a member of the Federales. Due to the gates which are blocking the roads, Tesoro Azul is one of the few settlements that doesn't have horsemen riding through.

A main feature of the Tesoro Azul location is the fortified ruins of a Catholic mission.

Nearly every building with a working door in Tesoro Azul has a chest containing cash. The mission building itself even has a second chest on the roof, which can be accessed via a ladder inside the building (this is the same location the player will find Jimmy Saint).

Upon completion, the player receives the Double-action Revolver, money, and either fame or honor. It is not necessary to save the soldier from being killed to complete the hideout.

The deadly courtyard of Tesoro Azul.

Gunfight in the courtyard.

A posse goes through Tesoro Azul. 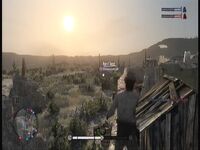 The sun rises over a gang match at Tesoro Azul.

Tezoro Azul from the east in Red Dead Redemption 2

Tezoro Azul from the east in Red Dead Redemption 2

The Tesoro Azul hideout is associated with the following achievements:

Retrieved from "https://reddead.fandom.com/wiki/Tesoro_Azul?oldid=386051"
Community content is available under CC-BY-SA unless otherwise noted.