–Thao Long when the player is near his stagecoach

Thao Long is a Chinese immigrant who makes his living as a stagecoach driver in various parts of New Austin.

He will be occasionally seen driving various Stagecoaches, as well as frequenting El Matadero. 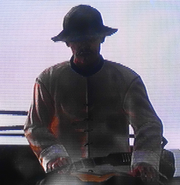 Thao Long, driving the 'coach.
Add a photo to this gallery
Retrieved from "https://reddead.fandom.com/wiki/Thao_Long?oldid=387685"
Community content is available under CC-BY-SA unless otherwise noted.