That's Murfree Country is a mission in Red Dead Redemption 2. It is the final mission of Chapter 5.

Dutch sends Arthur and Charles to Beaver Hollow to find a new location for the gang's camp.

After the gang are attacked by Pinkertons, Dutch realizes that the gang need to move and, because they can no longer go any further east, they must go north instead. Arthur and Charles ride to Roanoke Ridge (or by canoe if the player wishes) and eventually arrive at Beaver Hollow. After stealthily dispatching members of the Murfree gang who are outside the cave, Arthur and Charles then deal with those in the cave. After finding a girl named Meredith who had been captured and abused by the Murfrees, Arthur takes her back to her home in Annesburg while Charles goes back to the others to let them know where the new camp is.

As the gang are setting up the new camp, Uncle returns with a drunk Molly O'Shea. She claims that she ratted out the gang to the Pinkertons and taunts Dutch. Before she can say any more, Susan shoots her in the stomach with a shotgun, killing her, before asking Bill and Pearson to burn the body. 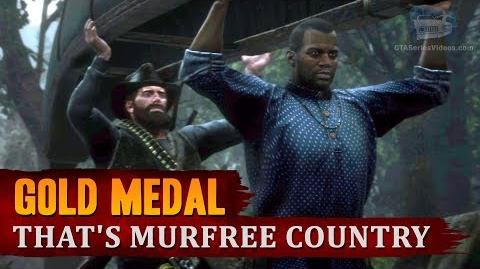 Retrieved from "https://reddead.fandom.com/wiki/That%27s_Murfree_Country?oldid=364932"
Community content is available under CC-BY-SA unless otherwise noted.