Pearson: "When we ran away from Blackwater... I wasn't able to get supplies in."
Arthur: "Well, when government agents are hunting you down...sometimes shopping trips need to be cut short. We'll survive...we always have...and if needs be, we can eat you...you're the fattest."
―Pearson talking to Arthur about the camp's low food supply.

The Aftermath of Genesis is a mission in Red Dead Redemption 2.

With the gang low on supplies and starving, Mr. Pearson sends Arthur and Charles out hunting.

Pearson informs Arthur that the camp is very low on food, and that soon people will begin to starve. Arthur and Charles decide to go hunting for food, and ride for a while before stopping to track an animal.

Arthur follows Charles for a while, and when Charles picks up a trail, Arthur goes to his horse to get his bow. The pair then stealthily follow the deer trail, trying not to scare the deer. They find it and Arthur kills it with his bow.

Arthur tracks a second deer and kills it, then puts the carcass on his horse whilst Charles puts the carcass of the first deer on his. As they are traveling, they encounter a bear roaming around. Charles advises Arthur to keep out of the way, despite there being more meat on the bear. It is up to the player whether they may try to kill the bear or not. Afterwards, they take the deer to Pearson's butcher's station and Arthur skins it. 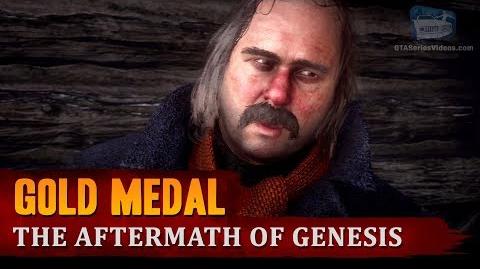 Retrieved from "https://reddead.fandom.com/wiki/The_Aftermath_of_Genesis?oldid=411521"
Community content is available under CC-BY-SA unless otherwise noted.