The Assault on Fort Mercer/dialogues

The Assault on Fort Mercer is the twenty-fourth mission in Red Dead Redemption.

John Marston and his group, consisting of Marshal Leigh Johnson, Deputies Eli and Jonah, Nigel West Dickens, Irish, Seth Briars and an unnamed deputy break into Fort Mercer, and try to find and capture Bill Williamson. West Dickens provides an armored stagecoach, Seth distracts the gang, Irish provides a Gatling Gun, and the Marshal and his deputies provide firepower. When the gang members are dealt with, a search of the rest of the Fort reveals Williamson is not there, and the only inhabitants are a few of his goons.

John is then sent to the front of the fort in order to defend it from Williamson's reinforcements, and after they are taken down as well, the Marshal's deputies tell Marston that they have captured one of the gang members. Once interrogated, the group learns that Bill Williamson has fled to Mexico in order to find Javier Escuella, another member of the gang Marston used to be a part of. John, therefore, must head to Mexico with Irish and continue his search for his former allies.

This is the first mission in which you are able to use a Gatling Gun. In the mission, the Gatling Gun is mounted inside West Dicken's stagecoach. As the stagecoach pulls inside, the back opens up and the posse is engaged in a fierce firefight with members of the Williamson Gang . They will approach from directly in front of the wagon and to the right of it. The well in the center of the courtyard will crumble under enough concentrated fire, making it easier to aim and shoot some of the well-hidden enemies. After they are dealt with, a search of the rest of the Fort reveals Williamson is not there. The last sequence of the mission has the player man the Gatling again and fend off reinforcements attacking the main gate of the fort. These reinforcements include both mounted and unmounted enemies, as well as two wagons with Gatling Guns mounted on them. Once they've been killed, sit back and enjoy the treatment of prisoners in the Old West!

"Seth has managed to get himself inside."

"But we can't leave it too long, or they will soon realize how very curious he is and remove him from the premises or slit his throat and watch him bleed to death. But for a minute, he will delight and amuse them. That's when he'll get us inside."

"Williamson is a proud fool."

"Come on in! Welcome to my humble abode!"

"Greetings, my good men! What would you say if I said immortality was at hand?"

"What would you say if I told you, I could teach you to fly?"

"What would you say if I told you, I could turn a man into a beautiful woman?"

"Impossible? Yes, once but no more."

"I have here in this wagon some of the finest goods, the best medicines and the newest inventions available for you and your families!"

"Say hello to my little friend!"

"Men, it is time to start tearing this place apart and find out where he's cowering!"

"A sense of urgency here, please."

"Oh, we've got company, gentlemen! These scoundrels have got reinforcements riding this way!"

"Oh my good lord above! There must be a hundred of 'em!"

"He says, Bill's already run off to Mexico yesterday morning."

"Where in Mexico, you little shit!"

"Some place near Chuparosa, I think he said."

"Oh, I'll take you there, John. I'm real popular down there. You just meet me at the ferry. I've got lots of friends down South."

"I'm sorry about this, John. I guess you'll be heading to Mexico." 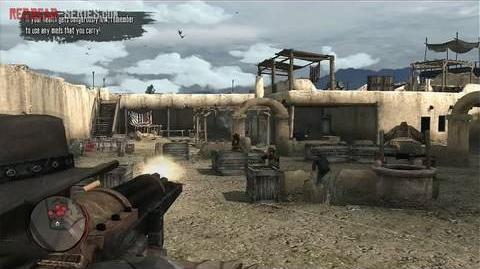 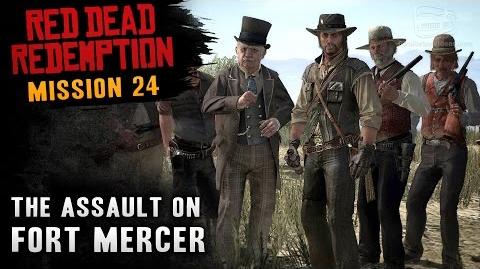 Retrieved from "https://reddead.fandom.com/wiki/The_Assault_on_Fort_Mercer?oldid=417480"
Community content is available under CC-BY-SA unless otherwise noted.