The Bridge to Nowhere

Realising that they had strayed from their original objective in blowing up the bridge, the pair load the dynamite crates on to a handcar and move them onto the bridge. They move it halfway and then stop, where they lower the crates onto the underside of the bridge. Here, they open the boxes and attach the dynamite bundles to the beams of the bridge, which are already wired to a detonator. As Arthur attaches the last bundle to a beam, John announces that a train is coming. Arthur quickly climbs up the ladder and works the handcar with John, with the train right on their tail. The pair narrowly manage to get to the end of the bridge and jump off the handcar and on to the ground, where John tells Arthur that they can use the detonator and finally blow up the bridge. Arthur does so, and the middle section of the bridge collapses and falls into the water below it.

With the bridge blown up, Arthur jokes that it won’t help in diverting attention away from the gang, with John saying that he doesn’t understand Dutch's plan and the logic behind it. Arthur reminds John that he needs to leave the gang and forget about "loyalty", saying that it’s done him no good over the years. When John claims that he’ll "think about" the idea of leaving the gang, Arthur tells him that he has, himself, done a lot of thinking, and that he’s come to the conclusion that he and John are risking their lives for nothing, and that the days of outlaw gangs are coming to an end, arguing that this isn’t why it’s so vital for John to leave. He also tells John that he’ll need money for it, and suggests using the gang's stash that Dutch has hidden. John tells him that Abigail thinks she knows where the money is, to which Arthur tells him to discuss this with him when she does, and that he’s seeing things more clearly now. John then drives the wagon away, and the two part ways. 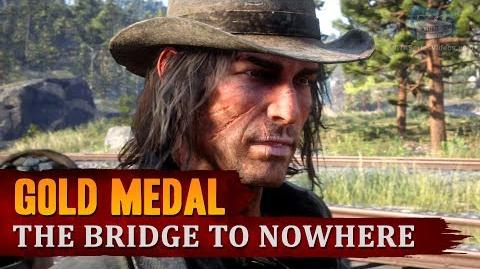