The Gates of El Presidio/dialogues
“Come on, you're not going to shoot your own brother, are you? We was family.”

The Gates of El Presidio is the fortieth mission in Red Dead Redemption.

Upon arriving at Agave Viejo, the player sees a scene of sexual nature — another nail in the coffin of the purported nobility of Abraham Reyes. After throwing his woman away and a brief discussion on the nature of marriage and class, Reyes informs John Marston that he has discovered that Javier Escuella is hiding within the Mexican Army at El Presidio. He invites Marston to join him as Reyes' Rebels attack El Presidio, to kill or capture Escuella, and take over El Presidio.

After the cinematic, get in the cart next to Reyes, and either skip to destination or wait it out. The cart will come to a halt not too far from El Presidio, and Reyes will light the fuse on the TNT in the back of your cart, telling you to hurry up and enter El Presidio. You are going to ram the cart into the front gates, but you'll have to jump out some time before it hits to avoid being killed. Marston needs to make sure the horses are running at full speed before he jumps out. Keep in mind that if he jumps out too soon, the cart will not make it to the gates and therefore will not explode.

Once the doors are open, the rebels will take out the guards coming out and enter El Presidio. There are three buildings in which you'll have to search for Javier, but he's in the barracks on the left. Once you enter El Presidio, go left up the stairs, and he's in the building straight ahead. Take out any guards, but don't think you can kill them all, as there will be constant reinforcements. Go up the stairs inside the barracks, and you'll find him there.

In exchange for his life/freedom, Javier will tell Marston that he can give him both Dutch and Bill and take him right to them. But instead, he pushes a crate onto Marston before he tries to escape. He'll jump out the window and run to his horse before trying to outride John. Follow him and either hogtie or shoot him.

After Marston takes care of Escuella, army reinforcements will begin to arrive. Run to your marker, where you'll mount a cannon. Simply point and shoot. The aim is slightly off, so it might require multiple shots, but aiming at the middle usually works. There are two horse patrols and two carts to take care of. After doing so, go down to pick up Escuella. As Marston is carrying Escuella, Reyes makes a joke about old friends reuniting being a beautiful thing.

Marston meets up with Edgar Ross and Archer Fordham, the two government agents that first sent him on this mission. Marston gives Escuella to the agents (Fordham will tell him off if Escuella is dead), who tell him to get Bill Williamson and then travel to Blackwater, because they believe Dutch is in the area.

Victor Melendez bludgeons a Mexican soldier while storming the gates

Marston deposits Escuella in a cell at El Presidio 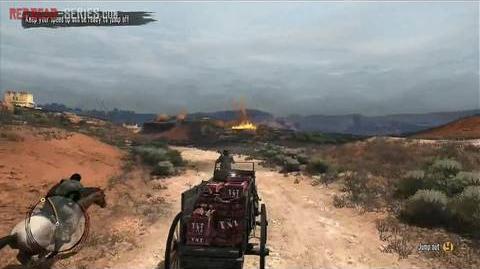 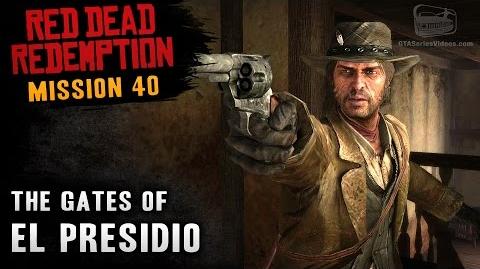 Retrieved from "https://reddead.fandom.com/wiki/The_Gates_of_El_Presidio?oldid=411944"
Community content is available under CC-BY-SA unless otherwise noted.