The Gilded Cage is a mission in Red Dead Redemption 2.

The gang attend a party hosted by the Mayor of Saint Denis. While at the party, they meet with Bronte, and look for job opportunities.

After arriving at the party, Arthur will go and start talking with a group of wealthy citizens, including Mayor Lemieux. Here, he removes a drunk man harassing the mayor from the party, endearing himself to the mayor.

Afterwards, the mayor's butler appears and informs the mayor that Leviticus Cornwall has telephoned the house and demanded that the mayor sign some documents. The mayor thanks his servant for informing him. Dutch overhears the conversation and tells Arthur to follow the man. The servant puts the ledger and the document inside the desk and locks it.

Arthur has to steal the documents and the ledger from the mayor's desk and then leave with the gang. 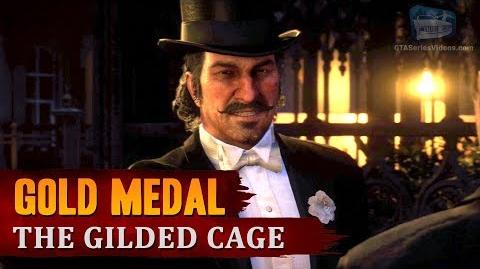