The Grand Korrigan is a riverboat in Red Dead Redemption 2 and Red Dead Online, in the Bayou Nwa region of the Lemoyne territory.

The Grand Korrigan was a lavish riverboat operating around the city of Saint Denis, famous for holding gambling tournaments and is consider as the "Queen of the Lannahechee". One such tournament, a high stakes poker game, became known to the gang while they were at a party, which they subsequently decided to rob. As such, Josiah Trelawny concocted an elaborate plan to rob the riverboat.

Arthur Morgan takes a seat on the poker table in the middle of the room on the riverboat and begins to play poker against Desmond Blythe, among others, while Leopold Strauss aids Arthur by subtly conveying what he should do. The majority of the players go bust after the first round, leaving only Arthur and Desmond Blythe, who bets his valuable Reutlinger pocket watch to stay in the game. Arthur quickly exhausts Blythe's chips and wins the game, so the Pit Boss escorts him upstairs with a security guard (who is actually Javier Escuella) to collect the Reutlinger from the safe.

When Arthur is up there with Javier, the two point their guns at the Pit Boss and Arthur takes his concealed revolver away. Arthur then loots the vault's contents: thousands of dollars and the Reutlinger pocket watch. As he finishes doing so, however, the Pit Boss prepares to kill Arthur with a second hidden gun, resulting in Arthur being forced to shoot him. The sound of the gunshot alerts the guards, who search the area. Meanwhile, the guard who Javier stole his uniform from wakes up and warns the others, causing a gunfight to ensue when the guards unmask the true culprits.

During the gunfight, the gang flees out to the deck. The group finds that the only way to return to the mainland is via swimming, which they reluctantly decide to do.

Later on, the player visits the riverboat to Jim "Boy" Calloway and Theodore Levin. After being escorted up to Calloway's room by a member of staff, the protagonist gives Levin the photographs of Emmet Granger, Billy Midnight, and Flaco Hernández, who the player had slain, as well as Black Belle; all of which would be used for Levin's book about Calloway. When Calloway himself hears that he is to be given the credit for their respective defeats, he becomes furious and instead suggests that the player gives him Slim Grant, with Calloway wishing to prove himself to be a legend. After Levin informs the player to bring Grant to Brandywine Drop, the player departs the riverboat, with Levin and Calloway presumably doing so soon afterward. 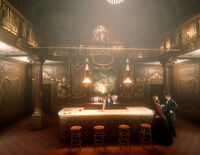