Chuparosa and right outside Casa Madrugada

The Great Mexican Train Robbery is the thirty-seventh mission in Red Dead Redemption.

John Marston goes to meet with Abraham Reyes in Agave Viejo. Reyes asks to Marston to help steal a supply train from the Mexican Army.

Get on a horse and follow Reyes, who'll lead you to Chuparosa. When you arrive, Reyes will explain that they need to disconnect the rear cars from the train, and it has to be done before they leave the station. Marston must kill the guards with a knife, so as to not draw their attention.

When Reyes distracts the guard, you'll have to get on the train without being spotted by the remaining guards. You need not waste a Throwing Knife on any soldier who is standing up straight facing away from you. In the case of the first guard at the train station, sneak up behind him and take out your Hunting Knife. If crouching and directly behind the guard, you can silently slit his throat. Do the same to the next guard who is urinating off the edge of the platform. Proceed forward, take your Throwing Knives and use them on the two guards at the back of the flatbed car. Move up the train, taking out any guards with the throwing knives, and looting them in order to get each knife back. Proceed to the target. Once reached, you'll see that there's another soldier on top of the station. Kill him with another throwing knife, before proceeding to the next target on the map.

After a short cutscene, the train will arrive with Reyes. Next, you'll have to pick up the explosives and climb the armored wagon. On top of the wagon, you'll see a hatch where you'll have to plant the explosives before running away. After it blows, go inside the same cart and head towards the safe. You'll have to crack it. Simply move the left stick left and right, and stop when it starts to vibrate.

After looting the safe, return outside and meet with Reyes. He'll tell you that he'll soon have the information you want, and then will leave you by the train. 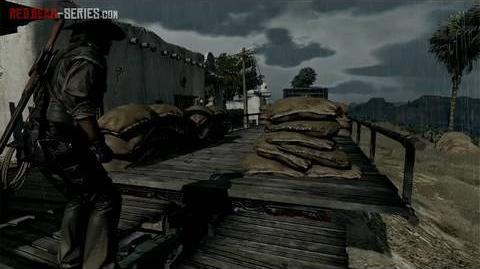 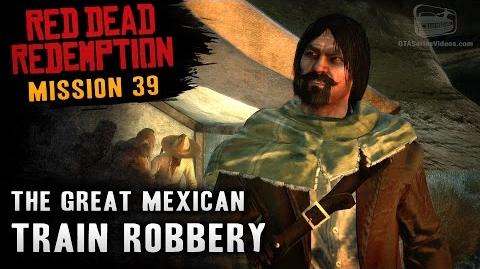 Retrieved from "https://reddead.fandom.com/wiki/The_Great_Mexican_Train_Robbery?oldid=404860"
Community content is available under CC-BY-SA unless otherwise noted.