“What are you doing here?”

The Gunslinger's Tragedy is the thirtieth mission in Red Dead Redemption.

John Marston walks into Chuparosa, a dusty & quiet town, fresh off the ferry and a new arrival to Mexico. He is greeted in a rather unpleasant way by a group of banditos and they demand a toll. They continue to terrorize John but he is forced to gun them down and leaves them to rot in the sun in the middle of the town after one steals his hat and another tries to make him take off his boots.

However, an old man witnessed all of this and mocks John's gun skills. He is an American too and offers to show John some techniques. The pair bond as they practice shooting. The old man is revealed to be Landon Ricketts, a retired and legendary gunslinger who was supposedly the fastest shot in the Old West. He gives John a lay of the land, talking about the local government and the smell of a revolution coming.

Later they are tasked to save a supply wagon that was hijacked outside of town by another group of banditos. Landon is the "town savior" and is respected by the locals. They return the wagon and Landon gets a hero's welcome back, while John is left standing...

As the mission begins, Ricketts gives Marston a new Schofield Revolver and wants you to shoot three glass bottles with your dead eye mode. This is simple, just go into Dead eye and mark each of the bottles. After you do that, he tests your dead eye skills again. He fires a shot, disturbing a bunch of vultures, which take off from the roofs and walls. You must kill at least two of them with your dead eye mode activated. After that, Ricketts asks you to follow him into Chuparosa. When you enter the town, a scared bank employee runs to you and says that the bank cart, delivering cash to the bank, has been attacked by bandits. After this short cutscene, you must mount your horse and follow Ricketts to the cart. It is not far from the town, just a little way down the road. The cart is being robbed by three bandits — two of them are normal enemies with rifles and revolvers, while the third one is holding the cart driver as a hostage. After killing the two rifle-holding enemies, enter dead eye mode and target the third one in the head, because harming the cart driver will result as mission failure. After this short battle, the driver asks you to escort the cart back to the town. On the way back, three more bandits appear blocking the road. Kill them and finish escorting the cart back to Chuparosa.

"Hey, what are you doing here, gringo? I don't remember inviting you to my country."

"You mean us no harm? This is funny!"

"What harm could you do to us, exactly?"

"Now, I appreciate the welcome committee, but I'd hate to spoil a beautiful afternoon, on such beautiful land, with any further unpleasantries. Now, if you'll excuse me..."

"Hold it, gringo. I think you are forgetting something... a little taxation!"

"So that we may see our families again, I suggest we part ways amicably."

"Can I see the boots, gringo?"

"I think you can see them from where you're standing just fine, señor."

"Take off the boots, Americano!"

"What a great way to improve border relations."

"An illiterate farmer crossing the river, coming into their civilization and butchering the local peasants..."

"You kill peasants, you become a peasant."

Marston: "I never aspired to be anything more."
Ricketts: "A socialist, huh? No wonder you left America..."

"An angry man a long way from home, a man who handles a gun as sloppy as you..."

"I can handle a gun okay, partner."

"As long as you're killing quail -- or peasants. If you have to face another man you don't stand a chance."

"I can show you a few tricks, come with me."

"Well, you won't make it into the circus, but you can shoot."

"No one interesting. Who're you?"

"Landon Ricketts. Not a name that means much anymore."

"It means a little. You were famous when I was a boy."

"Ya, killing men is a strange kind of fame. I was the fastest in my time, I must've been, I'm the only one left."

"What are you doing here?"

"I'm looking for a couple of men, Bill Williamson and Javier Escuella. Escuella is from here."

"It could be. This whole place is teeming with Americans on the run, mercenaries, locals hell-bent on revolution."

Marston: "Revolution? Another one?"
Ricketts: "Yeah. Never really ends. This whole place has been a hot bed for revolution since before the Spanish left."

"Now, there's another local guy running around promising the peasants their freedom. Hah. Just like the last two or three."

"Yeah... until someone puts a bullet in his head."

"C'mon, let's get back to it. You gotta keep that back straight, otherwise it makes the gun jump."
Add a photo to this gallery 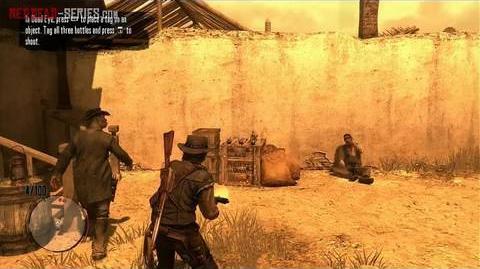 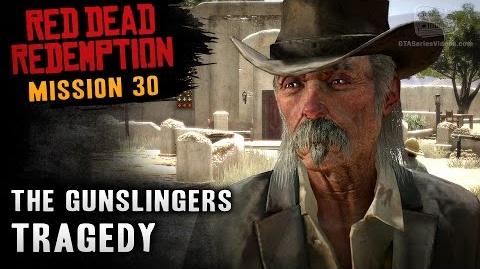 Retrieved from "https://reddead.fandom.com/wiki/The_Gunslinger%27s_Tragedy?oldid=406028"
Community content is available under CC-BY-SA unless otherwise noted.