N/A
The King's Son is a mission in Red Dead Redemption 2.

Upon learning that Eagle Flies has been captured by the army, Arthur and Charles infiltrate Fort Wallace to rescue him.

Arthur meets Charles at the Wapiti Indian Reservation, where Charles asks him to speak to Rains Fall. Arthur enters Rains Fall's tent, and the chief expresses his concern over Eagle Flies being captured, stating that he thinks his son is foolish but that he loves him regardless. After hearing this, Arthur, despite Rains Fall's initial protests, decides to rescue Eagle Flies. He finds Charles and the two set out for Fort Wallace.

During the journey there, Charles tells Arthur about his plan for infiltrating and escaping the fort, and also voices his dismay at Dutch's exploitation of the Wapiti Indians' situation. The conversation ultimately leads to Arthur informing Charles that he is terminally ill and will not live for much longer, after which Charles says that he is, in a way, lucky to know this as it gives him time to make amends. Charles suggests that Arthur may be with him for that purpose. The duo then arrive at the fort and wait until it is dark so that they are less likely to be noticed.

Charles and Arthur then sneak around the fort, staying close to the wall. In order to avoid detection, they use arrows and knives to silently kill the nearby guards, before arriving at the back. Here, Charles uses a grappling hook for him and Arthur to scale the wall and arrive inside. The pair continue to sneak around the outskirts of the fort, searching for Eagle Flies' location. They eventually come to a tower, where Charles suggests silently shooting a lantern in the distance to cause a fire, distracting the guards so they can enter prison area. Arthur does so, allowing them to enter the building unseen. After Charles kills the prison guard, Arthur steals the keys, unlocks the prison door, and cuts Eagle Flies free.

Immediately after, an alarm sounds, and the soldiers outside begin to open fire. After he and Charles dispatch them, Arthur looks for a way to escape the fort. He pinpoints a weak part of the wall and destroys it with dynamite, or by firing a cannon at it, after which he and Charles find their horses. With Eagle Flies safely on the back of Charles' horse, they ride away from the fort while being pursued by more soldiers. Arthur, Charles, and Eagle Flies subsequently reach the canoes that Charles left by the river, and after eliminating their pursuers, they board the canoes and sail down the rapids. More soldiers attack them, but Arthur manages to fend them off successfully.

The trio eventually disembark their canoes after reaching the riverbank. Eagle Flies says that Colonel Favours will not be happy and that there will likely be war with the Army, before thanking Arthur and Charles for rescuing him. Charles then mounts a horse left behind by a soldier and takes Eagle Flies back to the reservation, while Arthur stays at the scene briefly to recuperate. 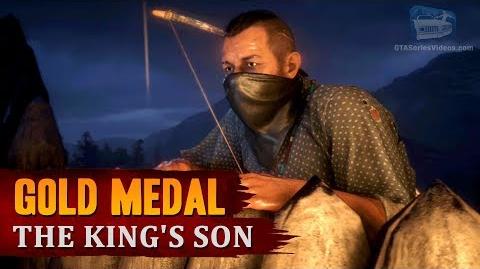