The Last Enemy That Shall Be Destroyed

View source
watch 00:48
Mission Overview: The Last Enemy That Shall Be Destroyed
Do you like this video?
Play Sound

Red Dead Redemption mission
The Last Enemy That Shall Be Destroyed

Ability to play as Jack Marston

The Last Enemy That Shall Be Destroyed/dialogues

The Last Enemy That Shall Be Destroyed is the fifty-seventh and final story mission in Red Dead Redemption. It is also the final mission that the player controls the primary protagonist, John Marston.

As the mission begins, John Marston walks into the workhouse to find his son working. He and Jack begin to speak optimistically of their future as ranchers and as a family, as well as an airplane demonstration due to come to the county next year. All seems well in Beecher's Hope until Uncle yells for John from outside. John knows what's coming (however, it is not revealed to the player at that point), so he immediately tells Jack to run into the house and lock all the doors and windows, and not to come out "no matter what".

After John and Uncle defeat the first wave of American soldiers attacking from the west, John runs into the house to check on his wife and son. He again tells Jack to stay in the house. This time Jack doesn't listen. Jack grabs a rifle and follows his father outside. The three men fight the onslaught, soldier by soldier. Uncle is fatally shot, but John and Jack continue the fight.

Another wave held off, John gets Abigail and tells her and Jack to get to the barn. He will hold off the next imminent wave of soldiers. This time they will come from the plains to the south. You may choose to hold them off from the ground or on top of the silo.

The Marston family hold off yet another wave of soldiers attacking their land. John runs into the barn, where he knows Jack and Abigail will be waiting. They are panicking, confused and think they should all run away. John knows that's not possible. He knows he can't escape his past. John puts his wife and son on a horse and tells them they need to ride and not stop. It's the only way they will have a chance. Reluctantly, Abigail kisses her husband goodbye. Jack and Abigail ride out the back of the barn, leaving John to face the fate from which he has tried so hard to escape.

John turns, peering between the barn doors at the last faces he will ever see. He stops, drops his head, and takes a long, deep breath. Then he looks up and pushes the doors wide open, revealing more than twenty soldiers all armed and aiming in his direction. In cinematic fashion, the camera switches to the Dead Eye Targeting mode, as the player takes control of John Marston in his last stand. John takes a few down, but ultimately it isn’t enough. He is mowed down by bullet after bullet, as his clothes become drenched with his blood. He falls onto his knees, spitting out blood, taking several winded gasps of breath, staring at the remaining Army members and bureau men. John falls backwards onto his back, takes his last breath, and, staring up into the sky, dies. He has sacrificed himself for his family, knowing that after his death the government won't need to chase them and they'll be able to finally live peacefully. He has finally achieved his redemption.

Amidst the group of men is Edgar Ross, smoking a cigar as he coldly looks over Marston's body, a vague look of satisfaction on his face. With a final, disdainful shake of his head, he signals the accompanying army and bureau men and they slowly walk away in silence.

Abigail hears the shots coming from the ranch and tells her son to go back. The player takes control of sixteen-year-old Jack as he rides back to the ranch, allowing him to spur the horse continuously without being bucked off. Jack and Abigail arrive to find John's body in a pool of blood. Abigail embraces her dead husband and weeps in bitter sadness for her fallen love and the life they never had.

Jack and Abigail bury John on the property alongside Uncle. The camera zooms in to John's grave, his epitaph reading "Blessed are the peacemakers". A quick fade reveals the same shot in a downpour, panning out from John's grave revealing Abigail's right beside it. She died three years later. A man, with a striking resemblance to John, looks down at the burial site, thinking. He puts Marston's hat on and turns, revealing himself to be the nineteen-year-old Jack Marston.

When the mission begins, the player must kill the first set of soldiers with Uncle. While the cart is the focal point when players first gain control, it is not very good cover as the Army can easily flank around and kill Marston. Instead, players should look to the right and take cover behind the cluster of boulders in front of the farmhouse.

After killing the first squad, Uncle instructs John to go check on his family, and a cutscene will begin when the player gets to their house, showing Jack coming out onto the porch. Players should then take cover behind the porch railing in front and kill the soldiers, taking cover and making sure their health is okay. Once Jack shoots one of their horses, that is a prime time to take them out as they are disoriented from the fall.

After killing a few soldiers, Uncle inevitably will get shot in the chest. Players should still focus on killing the rest of the soldiers. Some will begin to come from the north but stay on the south porch to catch them by surprise, and a cutscene will begin where Uncle advises John to get Abigail and Jack evacuated. He then coughs and dies. There is now a big lull before more soldiers arrive. Players should use it to gather ammo; rifle ammo can easily be acquired, as the U.S. Army soldiers mostly use Bolt Action Rifles.

John will herd his remaining family out toward the barn, but as they cross the road, more soldiers will arrive. The player should stay close to their family and protect them by taking out every enemy who comes near. Finally, the player will get to a cutscene where John sends Abigail and Jack away and is left to face a firing squad of U.S. Army troops headed by Edgar Ross. The player will immediately enter Dead Eye, although they should be careful not to press the Dead Eye button after this, as it will cause players to exit it. After the player fires a few shots with Dead Eye, the firing squad will gun John down. After this, the player will be in control of Jack, and they must ride back to the ranch to find John's corpse in a pool of blood riddled with bullet holes. Jack and Abigail mourn the death of John, and they bury his body on top of the hill overlooking the ranch, next to Uncle.

A cutscene then shows an older Jack Marston overlooking the graves of John, Uncle, and now Abigail, who died of unknown causes. The year is 1914, and Jack, who is now nineteen-years-old, decides to hunt down his father's killer.

Main article: The Last Enemy That Shall Be Destroyed/dialogues

When playing as John Marston, the mission will fail if the player:

When playing as Jack Marston, the mission will fail if the player: 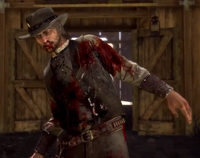 John in his final moments after being overwhelmed by gunfire

The fate of John Marston

Jack and Abigail mourn their departed loved one 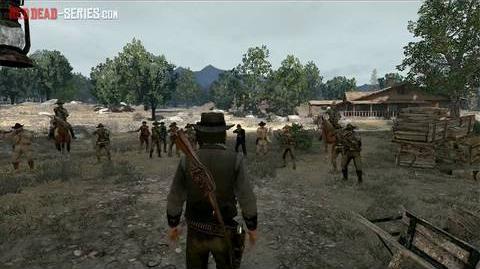 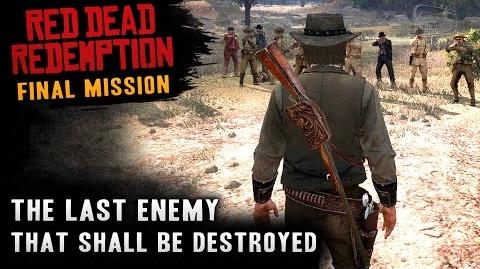