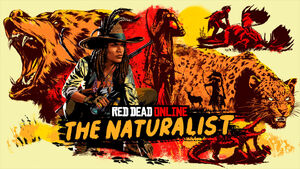 The Naturalist is one of the five specialist Roles in Red Dead Online.

Track, hunt and study the wonders of the animal kingdom in Red Dead Online’s latest Frontier Pursuit, The Naturalist.[1]

Naturalists are wildlife specialists who track and study animals, exchanging the samples and materials they gather rewards.[2]

To get started as a naturalist, the player must obtain a Sample Kit from Harriet Davenport. The standard cost is 25 Gold Bars.

The player is to track, hunt, and study the wonders of the animal kingdom and encounter majestic Legendary Animals. It is up to the player to choose whether to use these findings to learn new skills or use their resources for material gains.

Conservationist Harriet Davenport pays the player to track down specimens, sedate them and gathering blood samples, or by photographing the wild animals at a safe distance. However, Retired hunter Gus Macmillan, will reward the player generously for hunting those very same animals down and bringing their pelts and hides back to his shop.

Harriet's attitude towards the player will change if they recently killed animals, resulting in her condemning the players' actions or even outright insulting them. If the player continuously kills enough animals, Harriet will angrily spray them in the face with her hallucinogen spray, causing them to pass out and wake up nearby. She will then refuse to do business with the player for a short period of time.

After becoming as a naturalist, the player is given a Animal Field Guide, a compendium featuring the abundant species found across all of the frontier’s distinct habitats. Tracking, photographing, and sampling animals will add their information to the Animal Field Guide and help the player progress along in the Naturalist role. For the player to achieve 100% progress on an animal, they must track, kill, skin, study, sedate, sample and photograph said animal at least once.

Legendary Animals are distinctive creatures can be discovered both in Free Roam and through Animal Sighting assignments commissioned by Harriet. Using the Legendary Animal Map as a guide, the player will learn the locations of their native habitats and then follow information in the Animal Field Guide to locate each one. The player can then ultimately decide whether to obtain samples for Harriet and earn precious rewards, or poach them and have Gus turn their hides into ostentatious apparel for the player's wardrobe.

It should be noted that Gus will not accept a legendary pelt of an animal once the player samples it but only if it is killed beforehand. Due to this, the player will have to find a legendary animal at least twice to achieve 100% completion. Killing and skinning a legendary animal or killing a sedated animal results in Honor loss.

Legendary animals with extensive damage by fire, explosions or other methods cannot be sampled or skinned.

Once the player has reached rank 5 in the role, Harriet alerts them of a new plant she discovered and names it Harrietum Officinalis. They are purple and red flowers which allows the player to temporarily transform into an animal, with the help of the Vitalism Studies Pamphlet. Harriet gives the player the pamphlet, titled Field Diary and Notes by Harriet Davenport, after the initial cut scene. 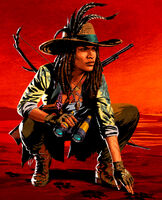 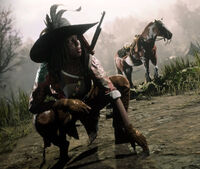 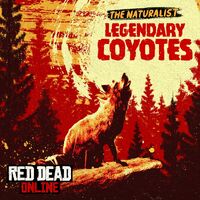 Hunting in the snowy parts of Ambarino

Banded Hood and Coat worn by the online protagonist

Retrieved from "https://reddead.fandom.com/wiki/The_Naturalist_(Red_Dead_Online)?oldid=415451"
Community content is available under CC-BY-SA unless otherwise noted.