The Noblest of Men, and a Woman is a four-part Stranger side-mission in Red Dead Redemption 2. The quest becomes available during Chapter 2.

After the Van der Linde gang sets up camp in Horseshoe Overlook, the player can travel to Valentine. By entering Keane's Saloon, he meets biographer Theodore Levin, who is attempting to have a conversation with Jim "Boy" Calloway, a supposed legendary duellist back in the Wild West.

Calloway drunkenly passes out and Levin vents his frustrations on the lack of details he's received from Calloway so far as well as the difficulty of interviewing him.

The protagonist strikes up a conversation with the biographer, who then offers him half the proceeds of his book to find and interview other legendary duellists about their interactions with Calloway.

Levin gives the protagonist pictures of four people: Flaco Hernández, Emmet Granger, Billy Midnight, and Black Belle. Levin asks him to speak with them about their gunslinging days and get a photo of them. Aware of their likely-sour dispositions, Levin suggests to him to "shoot them" if they give him trouble.

The player is tasked with finding four legendary gunslingers from the days of the Wild West. Levin gives him photographs with updated notes on where to find them. The locations of the gunslingers will be marked on the map once the photos and notes have been inspected. These gunslingers can be found in any order.

Black Belle resides in a hideout in Bluewater Marsh, north of Saint Denis. She is still on the run and is holed up to prevent bounty hunters from killing her. When the player approaches the porch of the house, Belle asks if he's a bounty hunter. When he declines, she spots three bounty hunters coming from a distance and tells him he led them here, but the player denies being one.

Belle promises to tell him a story if he follows her orders, so she tells him that the whole property is wired with explosives, and to flip the switch when she gives the word. A large-scale gunfight ensues, with Belle and the player killing waves of bounty hunters, including some armed with a Gatling gun.

Billy Midnight was last seen near the Rhodes train station. As a result, the player approaches the clerk in the station to ask of Billy's whereabouts, only to find out that Midnight will likely be found in one of the trains scheduled to stop at Valentine fairly soon.

The player boards the first train that arrives, and finds a drunken Midnight in the bar car but the old gunslinger, driven irrational by his heavy drinking and fearing that his past has finally caught up with him, panicks and runs through the train in an attempt to escape.

After reaching the front carriage, Midnight realizes that he has nowhere left to run, so he challenges the player to a duel; Billy ends up dead by the end, either killed by the protagonist or his own hand, and a picture is taken of his corpse. His weapon, Midnight's Pistol, can be obtained after his defeat.

Emmet Granger is located on a small farm south of the Horseshoe Overlook camp. He can be found near his pig stables and will not attack when approached. The protagonist mentions the book and Calloway, and Granger becomes irritated that the book isn't about him instead.

When the player asks for some stories, he promises to share some if he cleans the manure out of the pig stables. While the player reluctantly cleans the stables, Granger briefly recounts his cruel deeds, but refuses to account for any specifics of Calloway. After the player finishes the task, Granger refuses to share more details, merely complaining that the book should be written about him.

The protagonist isn't amused, so he grabs a stick of dynamite and plants it in the manure shed, before lighting it and, therefore, causing it to explode, showering both Granger and the entire property in pig manure. Granger becomes irate and a duel initiates; he is shot dead, and promptly afterward, the player takes a picture of his corpse. His custom revolver, Granger's Revolver, can be obtained after his defeat.

Flaco Hernández can be located in a remote cabin to the north, near Cairn Lake. The player approaches a modest camp with members of the Del Lobo Gang, where they can either kill the gang members and assault the camp, or convince them to allow for a meeting with Hernández peacefully.

The protagonist calls out to the Mexican gunslinger, asking him to spill details about Calloway. In response, Flaco comes out and says "Here's your message", leading to a duel. He dives sideways in an attempt to make the player miss, but fails and is shot fatally (if the player disarms him, he will pull out a Sawed-off Shotgun which cannot be disarmed). The protagonist may then proceed to take a picture of his corpse and loot his custom revolver, Flaco's Revolver, from the corpse.

The second part of the mission tree will initiate after completing the Chapter 4 quest "A Fine Night of Debauchery". The protagonist returns to the Valentine Saloon and the bartender tells the player that Calloway was last seen in Saint Denis.

He heads to Saint Denis to look for a large ferry on the south-east side of the town. There, they tell Levin about what transpired with interviewing the gunslingers. Levin wants to give Calloway the credit for defeating them as part of his book, but Calloway does not want this made-up glory. Instead, Calloway asks for the capture of Slim Grant, an old rival of his who killed his cousin. The player is then told about Slim Grant, an old rival of Boy Calloway who shot his cousin Ged Calloway in 1882. Levin wants to see a face-off between Calloway and Grant, to prove that he is a legend.

Slim Grant has become the State Marshal operating out of Annesburg. The player interacts with a deputy who told him that Grant has been missing for a few days after he went out searching for outlaws. The player then locates him and must kill the outlaws who kidnapped him, and then take State Marshal Grant to be confronted by Calloway.

However, Grant refuses to fight Calloway, resulting in an enraged Calloway losing his temper and shooting him in the back. Calloway then realizes the dishonor in what he had done and, outraged, challenges the player to a duel in order to reclaim his honor. In the ensuing duel, Calloway is killed. Shocked, Levin says that he’s glad that he no longer has to deal with Calloway, although he does bemoan that the last true gunslinger might have died. He, however, quickly figures out a way to make a good book of it, by fabricating a story where Jim Calloway is made responsible for slaying all of the legendary gunslingers, before dying at the hands of Slim Grant after mortally wounding him, only to be shot in the back by Grant. Levin then proceeds to leave the scene, at which point the player can pick up Calloway's Revolver.

A few days later, the player receives a letter and $350 from Levin, who says that his book about Calloway is selling very well, despite the fact that it is clearly a romanticized and fabricated story. Levin comments, in reference to an earlier conversation with the player, that Calloway can have the glory and he can have the freedom, or the other way around, as he is unsure of which way it is. While the story might not be true, it is still a good story and that is all that matters in the end here. 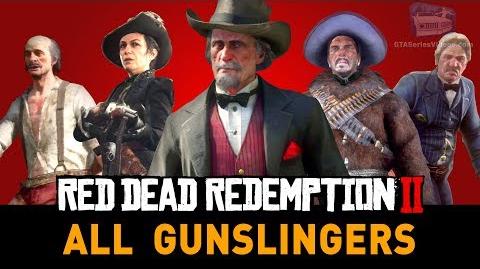 Completing this Stranger mission strand contributes toward the following Trophies/Achievements:

Français
Community content is available under CC-BY-SA unless otherwise noted.