The Sheep and the Goats

Red Dead Redemption 2 mission
The Sheep and the Goats

The Sheep and the Goats is a mission in Red Dead Redemption 2.

John has a plan to rustle a herd of sheep and sell them at auction in Valentine.

After herding the sheep, Dutch, Strauss, Arthur, and John are confronted by Leviticus Cornwall and his henchmen outside a saloon, which turns into a shootout.

The mission can be started by talking to John in the south part of Valentine. The player will then follow him to the gunsmith to buy a sniper rifle, the Rolling Block Rifle. Arthur will then follow John on horseback.

Once on the top of the cliff, the player will follow John's instructions and shoot the ground to scare the ranch hands. Arthur will ride to the herd and help wrangle the stragglers to the rest of the herd and will lead them to the auction house.

The auctioneer becomes suspicious of the sheep's origins and will argue with Arthur. John will then negotiate his requested 25% share down to 18% to prevent him from snitching. Arthur and John then meet up with Dutch at the nearby Keane's saloon.

Shown arguing with Strauss, Dutch beckons he and John collect the payment on the sheep before asking Arthur to join him for a drink. Shortly thereafter, Leviticus Cornwall arrives with an entourage of private guards outside the saloon, demanding Dutch to show himself. He has John and Strauss held outside as hostages. When the player goes outside, Dutch will begin to distract. After the guards have been dispatched, a firefight will then ensue in the town. While making a run through the main street, Strauss is shot and the gang is forced to grab a wagon to serve as cover and protect Strauss. Once the gang gets far enough, Arthur picks up Strauss and moves him to the back of John's horse. The player then escapes Valentine and the law, heading back to camp at Horseshoe Overlook. 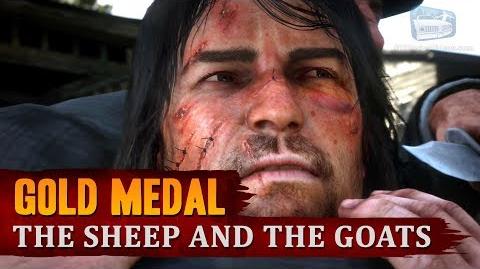