The Smell of the Grease Paint

The Smell of the Grease Paint

The Smell of the Grease Paint is a Stranger mission featured in Red Dead Redemption 2.

When entering the saloon of the Van Horn Trading Post, the protagonist encounters Miss Marjorie and a strong simpleton named Bertram, the leader of a traveling sideshow and one half of the talent, respectively. Bertram loses his temper with the bartender for taking a bottle of alcohol away from him. He begins choking the bartender before attempting to fight the protagonist. After a few good punches, Bertram apologizes. Miss Marjorie mentions that the other half of her act - Magnifico - has been missing. She needs help finding him, to save the highlight of her show.

Magnifico can be found southwest of the outpost, sitting at a campfire in the woods. When he realizes that Miss Marjorie has sent the protagonist to find him, he disappears in a cloud of smoke. This begins a chase where the player must follow the clouds of smoke to catch Magnifico. He attempts hiding in trees before fleeing across the railroad tracks and running right into the arms of Bertram and Miss Marjorie. The three of them then ride off for their next show, in Saint Denis, with an invitation to Arthur to visit them there.

After being introduced to the stage, Miss Marjorie greets the audience while cracking a whip. She introduces Bertram to the stage and states that he’s a simpleton, but a very strong one. She asks a volunteer to step up to the stage, to test Bertram's strength. A male volunteer comes up and punches Bertram twice in the stomach. which angers Bertram, causing him to attack the average-sized fellow. Marjorie is finally able to stop Bertram, but the man angrily confronts her, causing Bertram to effortlessly pick the man up.

Suddenly, Magnifico appears on stage, assuring the audience that he can control Bertram, ordering him to drop the helpless man. Magnifico then launches into his act, performing magic for the audience. He makes a chicken appear out of thin air, vanish, and then reappear, only this time on a plate, fully-cooked.

He then causes Miss Marjorie to have a “wardrobe malfunction” by making her top disappear, enraging her. She cracks her whip at Magnifico as he states that he only wanted to give them a show.. He then storms off stage, with Marjorie and Bertram soon following. After the show, the protagonist can return to the ticket-taker and collect some money and a letter from Miss Marjorie.

After initiating the quest-line, ride southwest to the woods and chase Magnifico. Follow his trail of smoke clouds until the mission is over. To collect your reward, visit Miss Marjorie's show in the Theatre Râleur in Saint Denis and watch their show. Afterwards, speak to the vendor and you'll receive a letter from Marjorie with $40 inside. 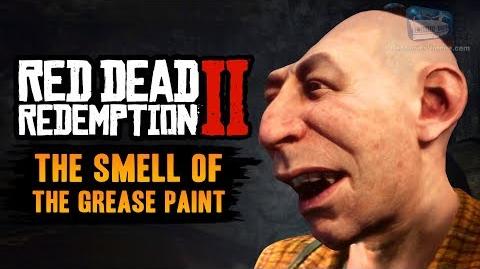