The Spines of America

Carmody Dell in The Heartlands

$82.50
Ability to sell wagons to Seamus.
The Spines of America is a mission in Red Dead Redemption 2.

To prove their business credentials to the Emerald Ranch fence, Seamus, Arthur, and Hosea attempt to rob a stagecoach from Old Bob Crawford at Carmody Dell.

Arthur will arrive at Emerald Ranch. Hosea is seen talking to Seamus. Hosea greets Arthur and introduces Seamus their new prospective business partner. Seamus tells Hosea that he problems with trusting them and believes they are amateurs. Hosea convinces Seamus that he and Arthur can prove themselves to him. Seamus asks them to steal a stolen stagecoach that was purchased from his cousin-in-law named Bob Crawford and if they are able to achieve the task Seamus states that he is willing to do business with them. Seamus tells them that Crawford lives around Carmody Dell. Seamus states that Crawford has money in his house and they can take the money if they like. Seamus tells them not to kill anyone. Once Arthur and Hosea arrive at the house, the player has the choice to rob during the daytime or nighttime.

If the player decides to go during nighttime Bob Crawford and his son will be sleeping. Arthur can steal items and money from the house. Afterward, Arthur and Hosea enter the barn and steal the stagecoach without being spotted.

Hosea and Seamus waiting for Arthur

The Crawfords after the treatment is done

Hosea on the stolen stagecoach 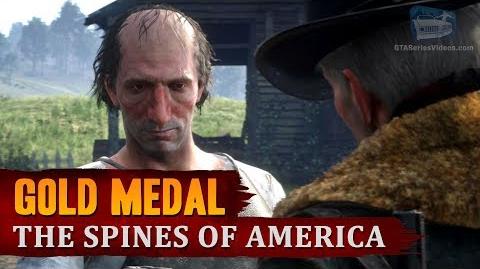