The Tool Box is a mission in Red Dead Redemption 2.

John purchases a pre-cut house from the Blackwater lumberyard. Hearing the Skinner Brothers are in the area, John, Charles, and two hired guns bring the lumber home via the toolmaker at Manzanita Post.

In Blackwater, John goes to Cakes Hardwood and Timber to purchase a pre-cut house from Albert Cakes. Then he must visit Manzanita Post to get the necessary tools. Charles, hearing the news regarding the Skinner Brothers' activities in the area, comes to help John transport the construction materials from Blackwater, through Tall Trees, and finally to Beecher's Hope. Charles has hired Mr. Wayne and Mr. Devon as additional protection for their wagons.

On the way to the Manzanita Post, Mr. Wayne tries to assure John that the presence of the two hired guns will scare any outlaws away, though John, a former outlaw, quickly points out that their protection might seem like a sign that the wagon is carrying something valuable and it might tempt outlaws instead. They soon arrive at Manzanita Post and acquire tools from Nils. The four men depart and continue their travel to Beecher's Hope.

Not long after, the wagons run into an ambush by Skinner Brothers. Mr. Wayne, unfortunately, is struck by an arrow in the right shoulder. The four men rush into the covers and fight back the Skinners. On hearing that Mr. Wayne has been kidnapped and his tool box stolen, John and Charles follow where the Skinners are taking him and the tool box while fighting off more Skinners on the way. Once they kill off the last of the Skinners, John and Charles continue on to find him. Unfortunately, they are too late, as they find Mr. Wayne's corpse tied to a tree, with a hatchet embedded in his skull, and the tool box lying at his feet. Charles unties the corpse while John reclaims the tool box, and they both make their way back to the wagons for the bad news.

Mr. Devon's wagons make their way back to Beecher's Hope, where Uncle awaits. John and Charles tell Uncle about the unfortunate accident involving the Skinner Brothers on the way, and how they were able to get the wooden planks and boards and the tools. As John and Uncle gather up the planks and boards, Charles tells John he'll take Mr. Wayne's body home for burial. 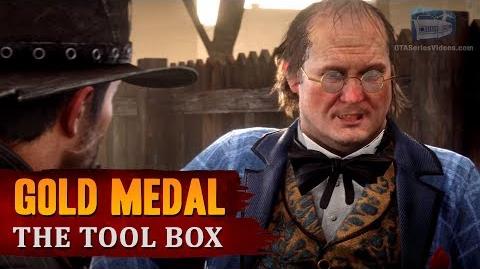 Retrieved from "https://reddead.fandom.com/wiki/The_Tool_Box?oldid=417136"
Community content is available under CC-BY-SA unless otherwise noted.