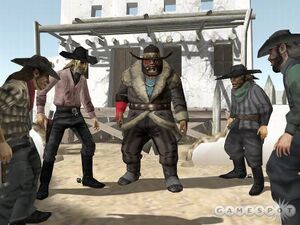 The Ugly Gang is a gang featured in Red Dead Revolver.

The Ugly Gang was founded and led by "Ugly" Chris Bailey, and a few gang "officers" such as "Hedgehog", "Chicken", "Whiskey", and "Gigolo". The gang took over Widow's Patch.

Red Harlow arrives in town during the mission "Ugly Streetfight". Sheriff O'Grady informs Red that because the Ugly Gang has taken over the town and stolen all of the money, he cannot pay Red. Some of the Ugly gang shoots and kills Red's dog which angers Red and provokes him to attack the gang, killing them, as well most of the other gang members.

"Ugly" Chris comes from the Sherrif's office and taking Sheriff O'Grady as both a hostage and human shield. After a long battle, Chris is gunned down by Red and the Ugly Gang is no more.

Retrieved from "https://reddead.fandom.com/wiki/The_Ugly_Gang?oldid=354466"
Community content is available under CC-BY-SA unless otherwise noted.