Theodore Levin is a minor character and a stranger featured in Red Dead Redemption 2.

Levin is an author who was tasked with writing a book about the famed exploits of Jim "Boy" Calloway, a legendary gunslinger from the height of the Wild West.

Levin is seen interviewing Calloway about his gun-slinging days at the Keane's Saloon in Valentine but Calloway passes out from drinking to much.

After his interview with Calloway yielded little to no detail, Levin asks the player to seek out four famous gunslingers who had past interactions with Calloway: Flaco Hernández, Emmet Granger, Billy Midnight and Black Belle, in order to gather information about Calloway and thus help him to write the biography. He gives the player pictures with their recent locations on them, along with a camera to take pictures of them.

Later, Levin and Calloway can be met on a riverboat in Saint Denis, where Levin is presented with the pictures of the deceased Emmet Granger, Flaco Hernández, Billy Midnight, all of whom were defeated in duels, as well as Black Belle - who had not been killed. Levin wants to give Calloway the credit for defeating them as part of his book, but Calloway does not want this. Instead, Calloway asks for the capture of Slim Grant, an old rival of his who killed his cousin. Levin asks the player to capture Slim Grant and deliver him to Brandywine Drop.

After Slim Grant is delivered to Calloway at the designated drop-off point, he and Calloway get into an argument, which results in Calloway challenging Slim Grant to a duel. However, Slim Grant refuses and walks away, only to be shot in the back and killed by Calloway who, after realising that what he has done is considered to be cowardly and dishonourable, challenges the player to a duel. Calloway is then slain, yet Levin is happy, saying that he no longer has to deal with him. With his mission of finding information about Calloway having ended, Levin asks the player where to send the money, before parting ways.

At some point later, Levin sends the protagonist $350 and a letter thanking them for their help with getting his book written. He says that the copies of the book are "selling like hotcakes", and mentions that he is unsure whether he has the freedom and Calloway has the glory, or whether he has the glory but Calloway has the freedom, in reference to an earlier conversation with the player. Levin's book fabricates Calloway's life as a gunslinger; it claims that he was the one who had defeated Emmet Granger, Billy Midnight and Flaco Hernández in duels, as well as saying that Calloway was ultimately shot in the back by Slim Grant, after mortally wounding him in a duel. 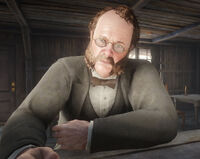