Thieves' Landing sits on the western shore of Flat Iron Lake and serves as a major port for the region, with most of the residents being dockworkers at the shipping yard. No law officers reside there, since the town is not under the federal government jurisdiction. Consequently, Criminals and outlaws loiter everywhere, earning Thieves' Landing its name. Duels and shootouts are common, and women are not very safe in this town, as they sometimes get kidnapped or killed by angry customers armed with knives.

Recently, The Bollard Twins gang started wreaking havoc in the town. Robbing shopkeepers, attacking residents, going through town in wild posses, and selling stolen cattle, the gang fully enjoys the lawlessness of this port. The members can be seen loitering at the saloon while socializing with other outlaws. They protect each other and will assist one of their own in a fight if provoked.

The settlement symbolizes the southern United States, with the surrounding swamps and bayous, the architecture, and the dark, humid atmosphere. It is often raining in Thieves' Landing, making it a wet area. The nearby Mason's Bridge and Dixon Crossing are references to the Mason-Dixon Line, the traditional border between the Northern states and the South. Also, the brothel located in this town bears the nickname of the South, "Dixie".

Tobin Winfield's bounty hunting mission begins in the settlement. Once the protagonist finds him at the stockyard, he'll plead with them to protect him from outlaws in exchange for leading them to where he stashed valuable deeds he had stolen.

The Del Lobo gang continues to operate in the area. Sixteen of the gang's members can be found here. Gang members will let the player go through the main road and ask that there be no visitors. If the player is hostile or loiters around longer, the gang members will begin to shoot the player.

Crimes committed in the town will not incur a Bounty, due to the absence of any form of Law Enforcement. Honor penalties are still incurred for killing innocent NPCs though. If the player possesses significant dishonor, the merchants in Thieves' Landing will sell items at half the rate and offer to purchase Provisions at double the rate.

The vast majority of Irish's mission "On Shaky's Ground" takes place at this location.

A portion of the Stranger side-missions "I Know You" and "Lights, Camera, Action" takes place in the Saloon.

When the undead overran this lawless harbor, the town was thrown into disarray. Many of the buildings caught fire; chairs were knocked over; dock workers, business owners, gamblers, prostitutes, outlaws, and drunks were all devoured and very few were able to make it to safety. However, Jacques Billeray, Mintie Cummings, Winona Picket, and Whit McSwain were able to find a safe refuge, and, taking what weapons they could find, began to fight back against the ravenous hordes.

Once the town is safe, the player will obtain Fire Bottles.

Several multiplayer game modes are available at Thieves' Landing. None are available with the original game, however. All require DLCs, as noted below.

Del Lobos near the shipping yard in Thieves' Landing

Del Lobos at the wooden fence in Thieves' Landing

The pier seen without the boat being present

Hostel seen from the east

Hostel seen from the south

An unknown house in Thieves' Landing

Del Lobo having a drink in Thieves' Landing

Del Lobo near the campfire in Thieves' Landing

The boat at Thieves' Landing 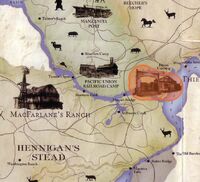