Thieves' Landing is a location featured in Red Dead Redemption and is a Settlement on the northeastern edge of the Hennigan's Stead region of the New Austin territory. The town sits on the western shores of Flat Iron Lake, and serves as a minor port for the region.

Thieves' Landing is an accurate name, the town being overrun by criminals and thugs, with no law enforcement of any kind present. Crimes committed in the town will not incur a bounty. The Bollard Twins Gang has a heavy presence within the town, but it also harbors unaffiliated criminals.

Thieves' Landing symbolizes the southern United States, with the surrounding swamps and bayous, the architecture, and the nearby Mason Bridge and Dixon Crossing, which are a reference to the Mason-Dixon Line; the traditional border between the Northern states and the South, often referred to as 'Dixie' because of this. The Dixie Rose brothel located in Thieves' Landing is another indicator of this.

When entering Thieves' Landing, the sky and overall area always darkens. This change in atmosphere symbolizes the danger of the town. This is also because it is a wet, marshy, bayou-like area; it is often raining in Thieves' Landing.

The vast majority of the Irish mission "On Shaky's Ground" takes place at this location.

When the undead overran this lawless harbour, the town was thrown into disarray. Many of the buildings caught fire; chairs were knocked over; drunks, gamblers, outlaws, and dock workers were all devoured and very few were able to make it to safety. However, Jacques Billeray, Mintie Cummings, Winona Picket, and Whit McSwain were able to find a safe refuge, and, taking what weapon they could, began to fight back against the ravenous hordes.

Once the town is safe, the player will obtain Fire Bottles.

Several Multiplayer game modes are available at Thieves' Landing. None are available with the original game, however. All require DLCs, as noted below.

The player's honor heavily affects their reception in Thieves' Landing. A player with high honor and fame or one wearing the U.S. Marshal Outfit or Bureau Uniform may be openly shot at by criminal elements. This can be circumvented by wearing the Bandana. The chance of being attacked increases significantly if the player has recently completed the Pike's Basin hideout (within the last two or three game days). Alternatively, capturing a Bollard Twins bounty or killing a member of the gang while in Thieves' Landing can be enough reason to set the criminals (mostly members of the Bollard Twins Gang) against the player.

Alternatively, if the player possesses significant dishonor, the merchants in Thieves' landing will offer to purchase Provisions at double the rate, and sell items at half the rate.

Honor penalties are still incurred for killing an innocent NPC of Thieves' Landing.

Ads in the News

The last scrap for the same outfit, as well as the Treasure Hunter Outfit and for the PS3 the Walton Gang Outfit are available at the tailor in Thieves' Landing. The Elegant Suit and the Bandana are also purchaseable at the tailor. 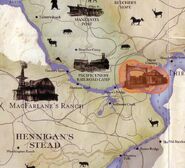 Thieves Landing. You will never find a more wretched hive of scum and villainy.

Retrieved from "https://reddead.fandom.com/wiki/Thieves%27_Landing?oldid=253578"
Community content is available under CC-BY-SA unless otherwise noted.