Village of Lagras in Bayou Nwa, State of Lemoyne

Thomas is a minor character featured in Red Dead Redemption 2 and a stranger in Red Dead Online.

Thomas is a Creole fisherman and a skiff captain from Lagras.

He can be found sitting on a bench at one of the houses in Lagras. If approached, Thomas will tell the protagonist that he might have some work for them, and will ask them to recover a boat, which was stolen by some men who are currently hiding out at Macomb's End.

After receiving the boat back, Thomas can offer other jobs to the protagonist, usually consisting of deliveries, hunting, and more recoveries. Accepting his missions will increase the player's honor level.

Thomas is hired by Dutch van der Linde to give him and his gang a boat ride to Angelo Bronte's mansion. First, however, he and Arthur must help Thomas rescue his friend Jules, who has gone missing. Dutch, Arthur and Thomas search the bayou for the man, eventually finding and rescuing him from a huge alligator.

Following this, Thomas honors his end of the deal and ferries Dutch and his men to the mansion, allowing them to catch the guards by surprise. After Bronte has been successfully kidnapped, Thomas waits for the gang on the boat and brings them back to Lagras, where he witnesses Bronte being drowned by Dutch. After disembarking the boat, Thomas is not seen again for the rest of the game. 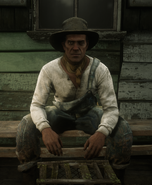