Downes Ranch in The Heartlands, State of New Hanover

The Charitable Organisation of New Hanover

Thomas Downes is a minor, but key character featured in Red Dead Redemption 2.

Thomas is married to Edith Downes and has a son named Archie. At some point, he started running a ranch and became a fundraiser for The Charitable Organisation of New Hanover.

Thomas Downes first appears upon the player's first visit to Valentine, to which he can be found near the stables opening a fundraiser for charity. During Arthur's brawl in the saloon, Thomas intervenes in the fight between Arthur and Tommy. Afterward, he is seen giving donations to the poor in Valentine, and he may ask Arthur to donate. He is heard coughing while talking about giving money to charity.

Being financially unstable, Downes sought and received a loan from Leopold Strauss. However, Thomas was unable to repay the loan, resulting in Strauss sending Arthur to reclaim the debt. Arthur arrives at his ranch, and when Thomas claims he has no money, Arthur threatens and physically assaults him. During the beating, Thomas coughs blood, some of which lands in Arthur's mouth. Edith tells Arthur that Thomas has an illness, so Arthur leaves the property.

It is later mentioned that Thomas passed away, presumably due to his illness, but both his wife and son clearly attribute his death to Arthur's assault and hold him personally responsible.

As the story progresses, Arthur noticeably begins showing symptoms of a cough, with increasing frequency and severity. After the Guarma chapter, Arthur's appearance also appears to have deteriorated.

While traveling to meet Sadie Adler in order to rescue John Marston from prison, a severe coughing fit causes Arthur to lose consciousness. After being helped to a clinic by a stranger, Arthur learns from the doctor that he has contracted tuberculosis, which is terminal and will ultimately kill him.

This leads to a turning point in Arthur's life, making him decide who he wants to be in the time he has left. Arthur himself speculates that he contracted the disease from Thomas Downes, as written in his journal: "All them bullets shot at me, all them horses threw me, all them fights and it was the beating of that pathetic little fella Downes that killed me, I reckon". He will later say something similar to Sister Calderón if the player has high honor and completes her mission strand.

Thomas Downes seen in Valentine during his fundraising campaign 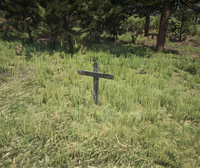