“Small hand-axe, which is usable in melee or thrown. A good throw can take down a target quietly.”

The Tomahawk is a weapon featured in the Red Dead Redemption Legends and Killers DLC pack.

The Tomahawk is a thrown weapon that is similar to the Throwing Knife with a few exceptions. When engaging a far away enemy, when throwing the Tomahawk, the player will have to compensate for gravity by aiming the appropriate height above the target. Another difference is that thrown Tomahawks are much more powerful than the Throwing Knife. Finally, the player can also melee close targets like with the Hunting Knife or the Torch. Executions are also possible but are much faster and will not trigger a cinematic camera view. 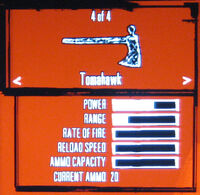 The Tomahawk is not always a one-hit kill, as seen by the one lodged in the opponent's back.

A Tomahawk in mid-air.

Buffalo Soldier and Shadow Wolf, both wielding the deadly Tomahawk.

Lawman Heath Michaels about to throw a Tomahawk with deadly accuracy.

A player wielding the Tomahawk, aiming at a wolf, whilst riding horseback.
Add a photo to this gallery

The following Trophies/Achievementsrequire the Tomahawk:

Retrieved from "https://reddead.fandom.com/wiki/Tomahawk?oldid=373091"
Community content is available under CC-BY-SA unless otherwise noted.